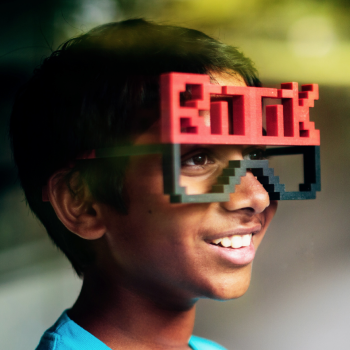 May is Autodesk’s Maker Month – a month-long celebration for creative makers and artists alike.

If the name Ritik Mehta sounds familiar, you aren’t alone. Ritik Mehta is a 13-year-old 3D printing enthusiast who has been using 3D technology to change the way others see their world by creating 3D printed customized eyeglasses for those who live in areas of the world where eyeglasses are not common.

3D printing is quickly picking up popularity, especially with young people. As with any new technology, kids are naturally drawn to it, and have a need to understand how it works. For 13-year-old Ritik Mehta, his enthusiasm for 3D printing began when he needed to print something in 3D for [email protected] , and had an idea to create eyeglasses with his name on them. Ritik was frustrated with not having the skills to design effectively, and so his dad introduced him to Tinkercad. With Tinkercad, Ritik learned how to make 3D models in record time, and his father rewarded him with a Makerbot.

The 3D printed eyeglasses project got Ritik started, and opened a world of opportunities for him. Last December, Ritik organized his own Music for Life event in which he raised money that he donated directly to EyesForTheWorld –a project that helps kids in Africa and Asia who suffer from poor vision.

Ritik’s focus remains similar to that of last year, and he hopes to use 3D printing to better the world.

Ritik’s dad says that he hopes Ritik’s story can inspire other kids to pursue the new technologies, and use them to help others.