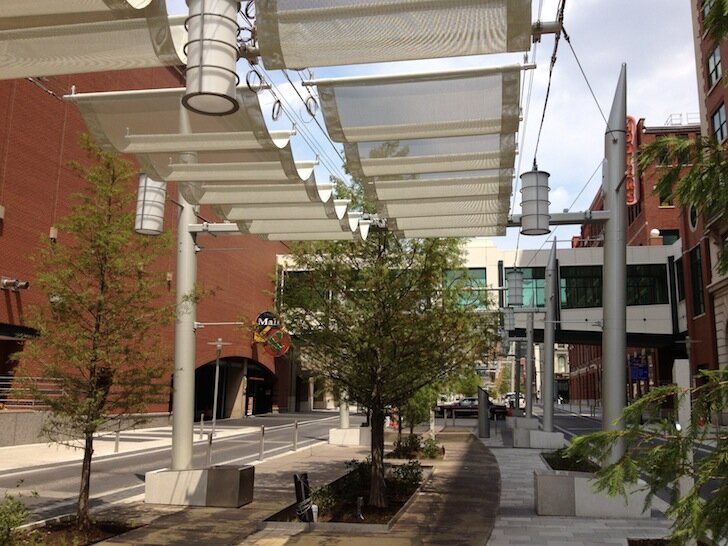 Although the news is filled with stories about cool new products and designs utilizing 3D Printing technology, it’s manufacturing applications that are propelling the business side of the industry. 3D Printers produce mass customized Invisalign dental braces and guides for orthopedic implants. Prototyping with 3D Printers at Ford and Boeing have been in the news as well. But what about small businesses? They drive a large portion of the economy and it’s interesting to see that small business is also embracing 3D Printing in their work.

One such company is Duvall Design located on the mid-Coast in Maine. The firm designs and produces awnings, but these are not the unattractive mechanical versions of your childhood. Charles Duvall’s designs look like wings or sails and grace the exteriors of art museums, cruise ship terminals, restaurants, zoos and other large public spaces all over the world.

So it is not surprising that last year the City of Indianapolis tapped Duvall to design and build a new wirelessly controlled retractable awning to cover 3 city blocks. The Georgia Street Promenade is a pedestrian passage between the Indiana Convention Center and Banker’s Life Fieldhouse to create a downtown destination for shopping, dining and entertainment. The awning acts as a sun shade, light mist shade, but also had to be decorative and give pedestrians the sense of a ceiling.

The Indianapolis project was a complex system since the French fabric shades had to integrate with lighting and heating as well as the wireless controller. Mr. Duvall recalls that he had purchased a Dimension 1200 ES 3D Printer from Statasys in 2009 to prototype complex jobs like this. “I got the 3D Printer because I wanted to experiment with new forms and shapes for our fixtures. Prototyping allowed me to optimize new designs but 3D Printing also saved me time and money over traditional machining technologies.”

For the 44 six-foot wide canopies, Mr. Duvall had to design a new, more robust suspended end tip, shown here. “Because the system was wireless”, explains the designer, “it’s easy to have the shade get stuck when deployed. I came up with a way to rotate the end tip to avoid this problem. It turned out to also be a benefit that it was non-captive, since the pin being held in place from a wire makes it easy to repair if needed.”

Working to create standardization, Mr. Duvall prototyped his end tip design in high strength ABS plastic. He could then use secondary machining to make modifications as he tested his ideas at his facility in Maine. Understanding the value of standardization, Mr. Duvall created a part that could work in multiple locations on the shade, ending up with 5 different parts in one.

Key to the speed of prototyping and testing was the 3D Printer’s ability to produce 30 end tips overnight that would have taken 2 weeks of machining. “I was able to then experiment with number of holes for the bearings and hole spacing, which turned out to be crucial,” Mr. Duvall says. “We actually used the 3D Printed parts in the 1st installation to test my concepts. The system that is wirelessly controlled via an iPad, also automatically closes when winds exceed 25 miles per hour and that had to be tested on location.”

In the field, it turned out 3 holes allowed for adjustable configurations, so that two wheels could be utilized for certain circumstances. Once the design proved it could be integrated with the other parts of the system, including lighting and heating, aluminum parts were fabricated. There are 1,000 parts in the final system that resulted from the 3D Printed prototypes.

Mr. Duvall, who is trained as an architect, says he bought the 3D Printer to experiment but he really wasn’t sure how it would be used in his business. It clearly turned out to be a powerful tool in the manufacturing process.