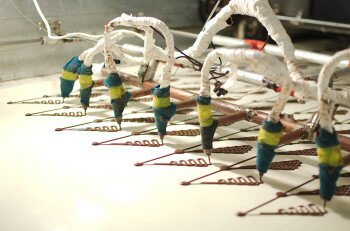 I love the idea of 3D printed foods.  At Thanksgiving, we reported on several technological advancements in 3D food printing and, luckily, the trend has not slowed down.  A company in South Africa doing some amazing things with 3D printing, using chocolate.

Fouche Chocolates engineer Hans Fouche has created an array of equipment to create custom delicacies in their Kempton Park factory.  Foche, who has been a 3D printing enthusiast for a long time, as well as a mechanical do-it-yourself hobbyist, has built and modified several machines to print their confections. The machines are operated by Foche, his wife Nicolette, and a half dozen member staff that work at the factory.  His inventions include an eight-headed 3D chocolate printer for creating edible designs en masse. 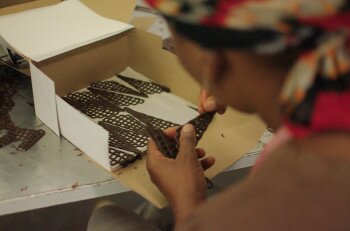 Foche is proud of what he has created saying “I could not have done this if I wasn’t an engineer, it would have been too expensive.”  He gives an example of a peristaltic pump for delivering the liquid chocolate to the various machines around the workshop.  Commercially available pumps would have cost a small fortune, according to Foche, but he was able to construct a workable model himself for a fraction of the cost.  His 3D printers included pieced together and modified inkjet printers that now print edible inks and vase shaped molds that extrude layers of confection.

He has an inventive spirit and believes he can create any unique chocolate design a customer wants.  Nestle and the Museum of African design are putting him to the test by ordering a collection of 3D printed chocolate sculptures for an exhibit in the Maboneng Precinct.  The designs that he has come up with so far have been extremely ambitious.  Foche says of the designs that “it was only through our experience with 3D printing chocolate that we were able to help the artists to realize what is actually possible.  The best are always simple and not overly complicated, because chocolate is difficult to work with, it does not support itself very well.” 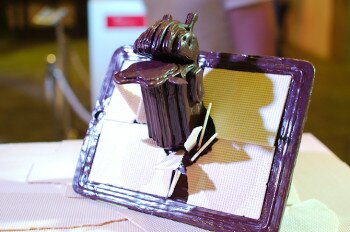 The exhibit, called Chocnology, received acclaim for its amazing chocolate design which took models celebrating the latest version of the Android operating system for smartphones and reproduced them in chocolate.