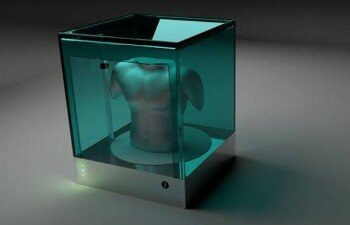 3D printing may soon be changing the way we look at clothes.

While still very much in the planning stages, the Electroloom 3D printer is predicted to be printing clothes by the end of 2014.

The Electroloom is the first 3D printer for clothes that is capable of creating uniquely and custom-designed pieces of apparel.

Electroloom is the name of both the 3D clothes printer, and the company that created it. Electroloom, the company, was founded by Acorn Rowley. Together, with his like-minded team, their goal has been to find a way to create and print comfortable, custom clothing, on-demand.

The Electroloom is capable of printing non-woven fabrics, into unique and complex structures.

As it stands, the Electroloom prototype can already print fabric as sheets and tubes made from material that resembles silk. But the hope is that it will be able to produce complicated shapes from fibers that resemble cotton by the end of 2014.

The Electroloom team was the recipient of Alternative Apparel’s Grant for Sustainability in Design & Technology, a design competition hosted in San Francisco, California during December 2013. The team was awarded $1000 for prototyping, a yearlong membership to TechShop San Francisco, and a design mentorship.

The grant will allow them to go further with their development, focusing more on the fibers that resemble cotton, and more complicated shapes – such as t-shirts. Sustainable production is one of the features that is hoped to set the Electroloom apart from its competition.

For the future, Rowley hopes to have an online database that features crowd-sourced designs. Basic templates would be provided to allow users to create to customized clothing that could then be 3D printed.

Electroloom hopes to shape the future of clothing with on-demand apparel, bringing the world one-step closer towards 3D printing becoming a way of life.