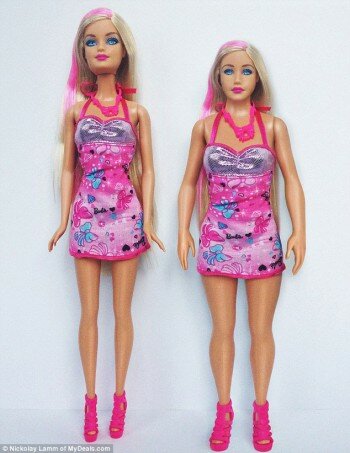 Barbie is the most popular doll in the world. Her ability to do every job and drive a convertible is very appealing to little girls. So, many girls want to be like Barbie. And it’s okay to want to be industrious and drive a convertible, but that’s not where girls’ desires to be like Barbie end. They also want to look like her. And that can be problematic.

Many, including academic institutions, have drawn attention to Barbie’s disorienting proportions. A 1996 study found that “Barbie’s mean girth z-score relative to a reference cross-section of the young adult population was −4.2. This indicates that the probability for such a body shape is less than 1 in 100,000.” And that’s a mean score. The specifics of Barbie’s anatomy scale to a 110 pound woman that’s nearly 6 feet tall with measurements of 32-16-29 (bust-waist-hips) and a children’s size three shoe. That’s not rare. It’s impossible. Being even close to that is anorexic.

Nickolay Lamm is a research artist of MyDeals.com, and he recently addressed the body dismorphic disorder of Barbie with 3D printing. Lamm states “I’ve read research and opinions suggesting that Barbie may or may not negatively affect young girls’ body image. This means that there’s a chance that Barbie harms young girls. If normal Barbie looks good, why not remove all doubt?”

Why not, indeed. He took the average measurements of 19 year old females, modeled them onto a doll, and had it 3D printed at a local 3D printing shop called pittsburgh-3d.com. The doll represents a woman that’s about 5’5”, 140 pounds, with measurements of 32-31-33, and it’s a beautiful, healthy shape.

Lamm isn’t alone in his opinion. He points to a study that specifically investigated the effects of Barbie on children’s perceptions of themselves, and the results were predictable: children exposed to Barbie have lower body esteem. Children base their expectations of the world on what they’re exposed to, and this doesn’t just apply to little girls. Boys too may develop desires for unrealistic bodies for themselves and women through such exposure.

As a man that finds curvy women especially attractive, I take issue with the parts of our society that create unrealistic standards for women’s appearances. The fashion industry is one of the most guilty culprits (though, Barbie is a fashion doll), where designers will create clothes that only 1 in a 1,000 women can naturally fit into, indirectly (and sometimes directly) encouraging other women to adjust their size accordingly through often unhealthy means.

If you’re naturally thin and you like to model, then more power to you; I’m not trying to attack your body or lifestyle, and you’re no less beautiful than curvier women. My point is that thin is neither average nor the only form of beauty. Beauty is not limited to a specific shape and weight, even if we are only talking about superficial attractiveness. By pushing “only thin is beautiful” campaigns on entire populations, millions are made to feel substandard, which just creates a sad population.