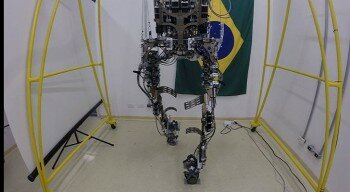 Thanks to 3D printing and mind-control technology, a paralyzed teen will be able to deliver the first kick at the men’s soccer World Cup 2014 in Brazil.

The teenager will wear a custom-built 3D printed helmet and a high-tech exoskeleton. There will be electrodes placed on his or her scalp or within the brain that transmit signals to a small computer worn like a backpack.

When the teen thinks about walking, the computer will turn those wireless commands into movement, allowing him or her to deliver the first kick at the World Cup opening ceremony.

This demonstration is being led by Dr. Miguel A.L. Nicolelis, a neuroscientist at Walk Again, an international collaboration that aims to use technology to help those who are paralyzed to walk again.

Dr. Miguel A.L Nicolelis grew up in Sao Paolo, Brazil with a passion for soccer. In 1985, Nicolelis completed his medical degree and a doctorate in physiology five years later. His future, it was clear, was in neuroscience and not soccer.

As Dr. Nicolelis’ work with mind-control technology gained international attention, he approached officials in Brazil to suggest that Walk Again be showcased at the end of the Opening Ceremony.

“Sports can be a huge avenue to reach out to people that would never actually pay attention to science news,” Dr. Nicolelis said. “I always wanted to show kids in Brazil how important science can be for society.”

The scheduled match for the men’s World Cup will be in Sao Paolo, Brazil on June 6.