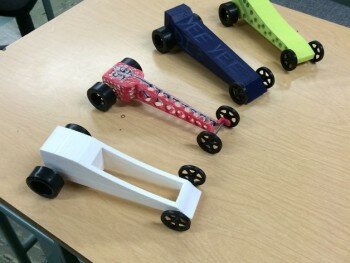 3D printing has made its way into many classrooms over the past year. With many schools adopting the latest technology, it’s interesting to see some of the new and inventive ways that teachers are using to introduce the technology to their students.

In previous years, his students designed and built their cars using wood, but this year White decided to change things up a bit and introduce a new technology to the process.

The students were given the task of designing a car that they thought would perform the best using Autodesk Inventor. The cars were then printed out using the school’s “Aluminum Mendel”, which was downloaded off of Thingiverse and constructed. All the students were given valuable hands-on experience in 3D design and printing, which White believes will benefit them later in life.

The cars’ wheels were not 3D printed, because the students ran out of time. But White says his students did design the wheels, and next year he plans to have his class print the entire car.

CO2 cars can get up to high speeds, and their speed and performance is dependent on the body’s design. The winner of the race was Mitch Davis. His red and black car (pictured) featured an aerodynamic design with holes throughout.