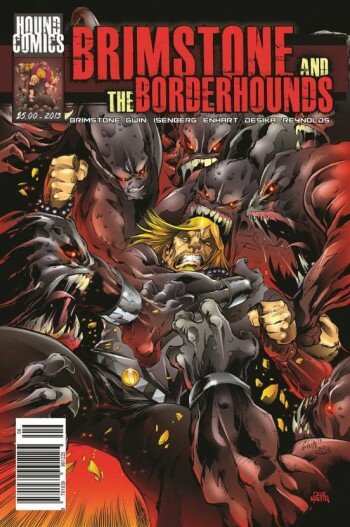 We already know about the 3D printed models that can mimic any of your favorite comic book characters, but now, a 3D printed comic book cover has made its debut.

Brimstone and the Borderhounds #9, was the lucky comic book that was given the 3D printed cover. This cover is a novelty, for sure, and you have to admit, as far as comic book covers go, this one is pretty unique.

Los Angeles-based 3D scan and print service, CoKreeate, was assigned the task of printing the comic book cover. The process was simple enough; a few scans, and once the scans were completed, a CAD drawing was created in Zbrush, and then the company set to work making the 2D comic book come to life. The cover was 3D printed in resin-hardened sandstone and in full color. The results are enough to get any die-hard comic fan excited.

The 3D printing company, CoKreeate, is no stranger to 3D printing, specializing in 3D statues, busts, and photographs. Now that the comic book has made its debut, fans and critics alike are wondering how long it will be until other comic books or posters will be 3D printed as well.

Comic book publishers are known to produce multiple styles of covers for ordering incentives, and while others have branched out to try new things, such as hologram covers or fancy artwork, as far as anyone knows this is the first actual comic book cover to sport the 3D printed look.