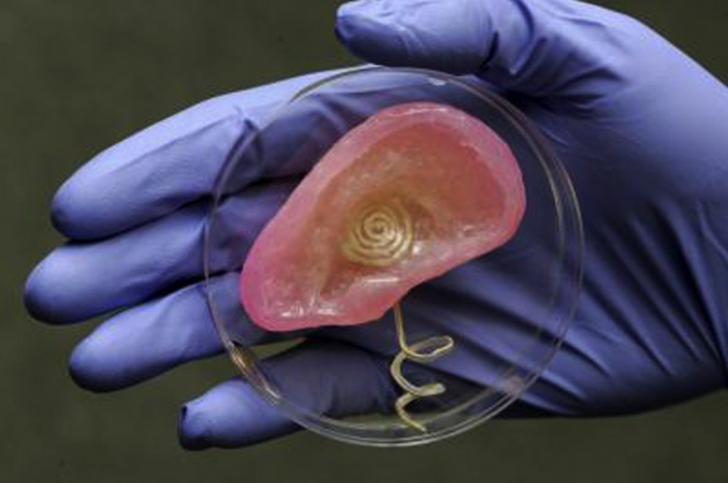 Most people’s interest in bioprinting stems from desires to fix some damaged part of themselves. Perhaps they got breast cancer and don’t want a mastectomy, or they drank a lot and want a new liver, or they have Degenerative Disc Disease and need a new spine. There are plenty of ailments that bioprinting will offer solutions for. But what if you just want to be better than you are? People that identify as transhumanists are not satisfied with their bodies’ limitations, even if they’re working properly. With those people in mind, engineers led by Michael McAlpine at Princeton have printed the first bionic ear.

This is isn’t the first ear to be bioprinted, but it is the first that can pick up radio frequencies. The process involved combining silver nanoparticles with a 3D printed hydrogel that held live cells, but the abstract describes it better than I can:

“As a proof of concept, we generated a bionic ear via 3D printing of a cell-seeded hydrogel matrix in the anatomic geometry of a human ear, along with an intertwined conducting polymer consisting of infused silver nanoparticles. This allowed for in vitro culturing of cartilage tissue around an inductive coil antenna in the ear, which subsequently enables readout of inductively-coupled signals from cochlea-shaped electrodes. The printed ear exhibits enhanced auditory sensing for radio frequency reception, and complementary left and right ears can listen to stereo audio music.”

Enhanced auditory sensing. I could use some of that. Or some heightened visual acuity. Maybe increased olfaction. And these are just concerning the senses. Other organs of the body could be augmented too, like lungs that respire more effectively, or a heart that could pump harder and faster on demand.

The paper reads, “This field has the potential to generate customized replacement parts for the human body, or even create organs containing capabilities beyond what human biology ordinarily provides.” Combined with future gene therapies, it’s possible that 3D printed organs could extend life expectancy to far beyond 100 years. I could still use some better functioning arms in the meantime.