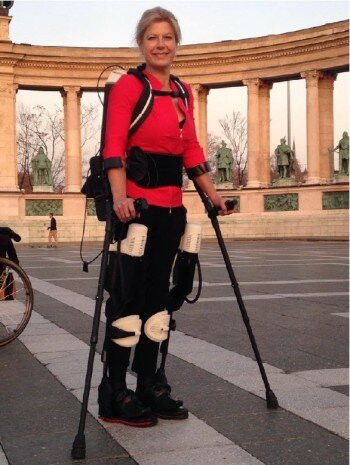 In 1992, Amanda Boxtel was involved in a catastrophic skiing accident and became paralyzed from the waist down. Doctors told her that she would never walk again.

But now, nearly 20 years after the skiing accident, Boxtel took her first steps since the accident – despite her paralysis. Thanks to the recently revealed 3D printed hybrid exoskeleton robotic suit, Boxtel was standing tall in Budapest, and was walking on her own.

The exoskeleton suit was a collaboration effort between 3D Systems and EksoBionics. The suit was custom made specifically for Boxtel, using 3D scanning techniques to provide the best shape. The suit was then equipped with controls and actuators – provided by EksoBionics.

This 3D printed suit is the first of its kind – the first bespoke exoskeleton. Since the suit was 3D printed, the materials are light enough to allow Boxtel’s skin breathing room. While it is loose enough to breathe, it is also tight enough to allow Boxtel to be able to move. And with the unique design, Boxtel is able to use the suit without having to worry about bruising, due to hard components – a big concern with people who are paralyzed, since there is the potential to bruise without realizing it.

“When the robot becomes the enabling device to take every step for the rest of your life,” said Scott Summit, the senior director for functional design at 3D Systems. “The connection between the body and the robot is everything. So our goal is to enhance the quality of that connection so the robot becomes more symbiotic.”

Boxtel’s exoskeleton suit debut took place at a Singularity University-hosted event in Budapest. The video below shows her walking in the suit.