One of Dutch designer van Herpen’s eleven-piece collection was an elaborate skirt and cape created in collaboration with artist, architect, designer and MIT professor Neri Oxman, and 3D printed by Stratasys on an Objet Connex multi-material 3D printer. This printer can print both hard and soft materials in a single build, the combination of which provides essential movement and texture.

Oxman comments, “The ability to vary softness and elasticity inspired us to design a “second skin” for the body acting as armor-in-motion; in this way we were able to design not only the garment’s form but also its motion. The incredible possibilities afforded by these new technologies allowed us to reinterpret the tradition of couture as ‘tech-couture’ where delicate hand-made embroidery and needlework is replaced by code.”

Van Herpen adds, “I feel it’s important that fashion can be about much more than consumerism, but also about new beginnings and self-expression, so my work very much comes from abstract ideas and using new techniques, not the re-invention of old ideas. I find the process of 3D printing fascinating because I believe it will only be a matter of time before we see the clothing we wear today produced with this technology, and it’s because it’s such a different way of manufacturing, adding layer-by-layer, it will be a great source of inspiration for new ideas.”

Another piece — which I personally think is beautiful, sexy and something a woman might actually wear — was an intricate dress designed by Austrian architect and fashion designer Julia Koerner, and was 3D printed by Materialise. Van Herpen, Koerner and Materialise have worked together before, pushing the limits of 3D printing and fashion. For this dress, they used an experimental new material to create a flexible, soft, stunning and complex dress. The 3D printing process called Laser Sintering was used to create the lace-like texture, which would have been impossible to make any other way. 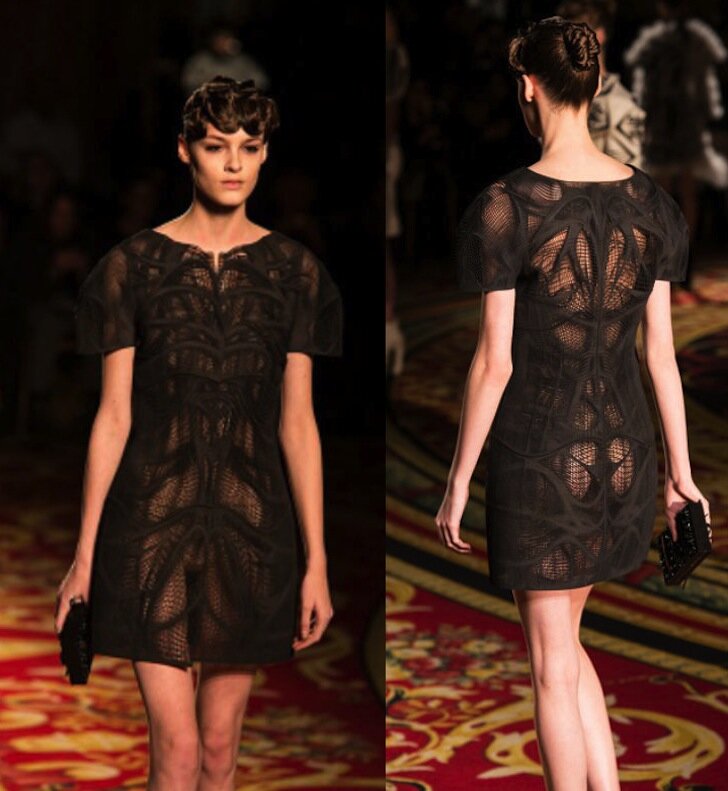 Julia Koerner says of her work, “My collaboration with Materialise for the 3D printed dress for Iris van Herpen’s Haute Couture Show ‘Voltage’ 2013 reveals a highly complex, parametrically generated, geometrical structure. The architectural structure aims to superimpose multiple layers of thin woven lines which animate the body in an organic way. Exploiting computational boundaries in combination with emergent technology selective laser sintering, of a new flexible material, lead to enticing and enigmatic effects within fashion design. New possibilities arise such as eliminating seams and cuts where they are usually placed in couture.”

You weren’t in Paris? You will still have the chance to view Oxman’s ensemble in the near future in Massachusetts. The skirt and cape will be exhibited at MIT’s Media Lab following the Paris Fashion Show.

UPDATE: Objet has released a video from the event. Here you go:

UPDATE 2: i.Materialise has released a video of printing the material: