The idea of 3D printed firearms has been a hot topic in the news these last few weeks, since someone printed a functioning part of a firearm. We’ve got another gun for you today. 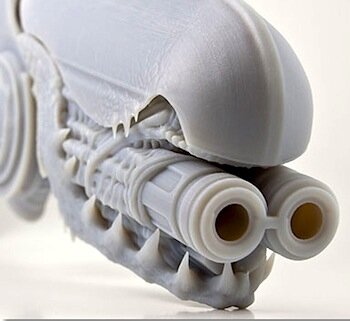 Just look at the detail on this beauty.

If you’re one of those who went ballistic over the gun issue, don’t worry, this time it’s all in fun. These aren’t operable guns, they are prototypes of futuristic handguns, 3D-printed in anticipation of the third movie in the Men in Black trilogy.

We’ve shown one of the guns they’ve created here; you can see a gallery of more photos, which include more detail on this MIB piece and others.

Moddler is an example of the new type of company that 3D printing is bringing to the world. They are a very small company (two people) with a very expensive 3D printer ($250,000?), which lets them do very incredible things for their customers. We profiled Moddler back in July, and you can find a video in that story that shows more of the models they’ve printed.

They appeared yesterday in the Objet blog, which often shows off some of their customers’ best work. I highly recommend that you subscribe to its newsfeed.