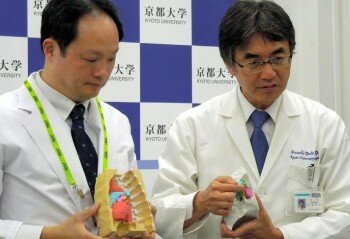 For the first time ever, a living-donor opposite-side lung transplant has taken place.

A Japanese woman from Kansai, Japan was diagnosed with irreversible pulmonary fibrosis. Her condition was so bad that she required a lung transplant. But no donor lungs were available, and only someone who has the same blood type as the recipient is able to be a living donor. Thankfully, however, her husband was of the same blood and tissue type –making him a viable option for a donor.

The problem arose, however, when the husband’s left lung was found to be too small to be a transplant option for the woman’s left lung. His right lung, however, was bigger, which meant that a portion of his right lung could potentially be used for his wife’s left side.

The operation would involve taking a portion of the husband’s right lung, rotating it, and implanting it into his wife’s left lung.

While this sounds like a simple enough solution, the reality is that implanting a lung with part of a donor lung from the opposite side presents some serious challenges. Unlike a typical lung transplant, during this procedure, the donor lung was from the opposite side, which meant that the blood vessels and arteries were in different areas. Surgeons needed to prepare for the complications that this surgery would involve.

In order to ensure a successful operation, the Kyoto University Hospital borrowed a 3D printer from Nagoya City University, and printed out models of the woman’s lung and chest. The surgeons needed to practice and prepare for the challenging surgery, and 3D printing provided models which allowed them to do just that.

The surgery was successful, and on May 10, the patient was discharged and it is reported that both the woman and her husband, are now back to living their normal lives.

Being able to replace right lungs with left lungs will open up the door and allow other patients to undergo similar procedures, although additional research will be needed before this type of surgery becomes the norm.