I remember as a kid, making model airplanes out of balsa wood kits. I wasn’t very good at it, as my low level of patience always had me cutting corners, inevitably causing structural defects (along with a few slices of my fingers with the exacto knife).

Hobbyists of the very near future are going to have a much easier time at making model planes, as 3D printer maker Objet’s materials engineer Shai Hirsh demonstrates. Instead of measuring, cutting and glueing the balsa wood manually, he has designed and 3D printed his model airplane’s lightweight and strong structure–a structure that won’t break apart as easily as a balsa airplane on those unanticipated hard landings. 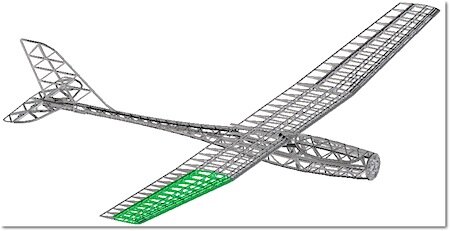 Hirsch, in his spare time at Objet, has created a good-sized, remote control airplane using the Object Connex500 3D printer. The printed parts include the front and back fuselage, central wings and wing tips, horizontal stabilizer/elevator, and the canopy. The open truss structure design is the same found in full-size airplanes made out of steel or aluminum tubing, welded together into triangular shapes called trusses. Of course, with 3D printing, there is no welding (analogous to no glueing in model airplanes) — they are printed as complete parts.

An interesting note, something that blows away people new to 3D printing, is that the moving parts–in this case, the hinged aileron, elevator and rudder assemblies–are 3D printed in one go.

And, think about this: if Hirsch decides to modify the design for different aerodynamic characteristics, all he has to do is go to his 3D modeling program, make a few changes, and reprint a particular section and reassemble. This would be tough with a balsa model.

Here’s Shai’s on building 3D printed airplanes: “I always liked planes and flew remote control planes for a short while as a kid, but the engineering was a little bit too complex for me back then. Then a few years ago electric propulsion for remote control planes started really growing and so I got back into flying.

“I fly my planes once or twice a week and I work on advanced aerobatic flying techniques – so the actual flying of this plane was quite elementary. The interesting part was designing it and simply getting it off the ground. I’ve been trying to combine 3D printing and remote control planes for some time now. I started with unpowered gliders and rubber powered planes, but they tended to crash too many times and break before I could set them up for stable flight. So I decided to move into the more complex, but more controlled electric powered versions. This is also a sort of test bench for me for measuring the limits of our 3D printing technology.”

As with seemingly every industry, 3D printing is making us rethink how we make things.

Source: Objet blog by Sam Green (sorry, it seems Objet pulled the post off their blog)

Mark is the founder of 3DPrinter.net. He encourages anyone reading this to submit their own article for publication. Connect with him on his Google+ account. View all posts by Mark Fleming »

One Response to “3D-printed model airplanes are taking off”