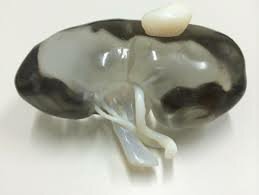 3D printing technology has aided in a number of different surgeries over the past few months, allowing surgeons to print 3D models to help guide them through difficult surgeries and prepare them ahead of time for obstacles that might not otherwise have been seen.

But now, for the first time ever, 3D printing has been used to produce models of kidneys with tumors, to use in stimulated cancer surgery. Surgeons from Japan announced the news at the European Association of Urology (EAU) congress in Stockholm, Sweden.

Kidney cancer is among the top ten most common cancers affecting adults. This type of cancer is generally treated with surgery – but the surgeries are difficult, and stressful. The need for accuracy and speed is essential to the patient. But now, 3D printing technology is enabling faster and more accurate surgeries.

By using CT scans, the surgeons were able to produce 3D scans of the patient’s kidney. The information was then sent to a 3D printer, and a 3D model of the kidney was produced. The transparent 3D printed kidney model allows surgeons to see exactly where the patient’s blood vessels are, and allow surgeons to perform “surgery” on the model before performing the real surgery.

“The use of this ‘hands-on’ model system gave us a 3D anatomical understanding of the kidney and the tumor,” says lead researcher Dr. Yoshiyuki Shiga. “This enabled the surgeon to work on a smaller area.”

The 3D printed models allow for a reduction of the interruption to the blood supply that occurs during surgery. The normal average time of this interruption is 22 minutes, but, by first practicing on the 3D-printed kidney, the surgeons were able to reduce the interruption time; in one case, to just 8 minutes.

While the 3D modeling and printing technique is still costly, researchers remain optimistic that those costs are likely to continue to go down.

“At the moment this is still an expensive technique, adding between $500 and $1,500 to the cost of surgery,” said Dr. Shiga, “but we hope that if it is more widely used then costs will fall.”