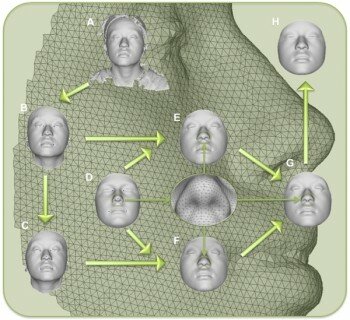 Thanks to advancements in technology, it may soon be possible to create a 3D printed mug shot of a criminal based on a piece of DNA evidence left at the scene.

Mark Shriver, an anthropologist of Pennsylvania State University, has created a computer program that may one day make this a possibility.

Shriver, along with his team, has taken high-resolution 3D images of nearly 600 volunteers, and used them to create 3D models and give them reference points of facial features. The team used grids to measure the facial features of mixed ethnic groups. They then focused on the genes thought to be involved in facial development. After great research, the team found 24 variants in 20 genes that could help predict facial features based on DNA.

However, this tool is still far from being efficient or effective. Shriver continues to refine his tool by sampling more people. According to Shriver, in the future this development will allow for 3D printed images of a person (or criminals) face based on DNA. “Such predictive modeling could be forensically useful; for example, DNA left at crime scenes could be tested and faces predicted in order to help to narrow the pool of potential suspects,” the team said. In the future, this development could be merged with a 3D printer to create 3D models of a person’s face based solely on a piece of DNA.

“I believe that in five to 10 years’ time, we will be able to computationally predict a face,” writes Peter Claes of the Catholic University of Leuven (KUL), co-author of the work, published in PLOS Genetics1.