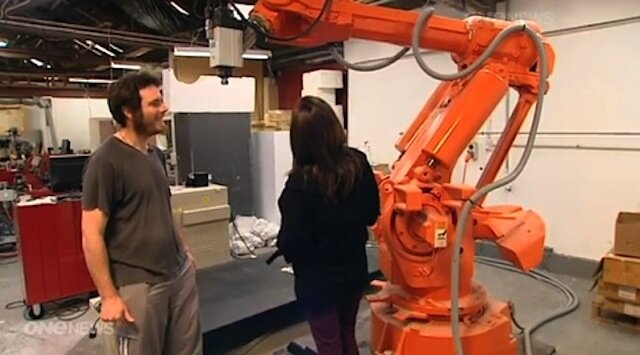 This bad boy is one damn big 3D printer!

If you’re curious as to how movie props used to be made, well you’re reading the wrong site. I can tell you how they’re made today though, at least how Weta Workshop makes theirs. In case you’re like me and had not heard of them until now, Weta did the effects for the Lord of the Rings movies and they’re also working on The Hobbit: An Unexpected Journey. The Hobbit is my favorite of the prequel of any series and it’s also the only one of the series that I finished because Fellowship of the Ring made me not like words for a bit, so I’m looking forward to the three-hour cinematic version with new and improved 3D printed props.

From weapons like the Orcrist and Sting to apparel such as helmets and buckles, they’re all printable. Even Hollywood prosthetics like feet extenders and ears can be printed; medical grade noses are being printed elsewhere. Really, there’s not much on a movie set that can’t be printed, especially when you’re working with a modified robotic milling arm that can print a car. Really, if Ian McKellen doesn’t show up they could probably just print his face and let someone else act like he would act like a wizard.

When they can print mithril, I’ll be really excited.