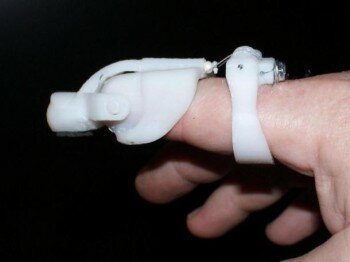 During a tragic-work related accident that had devastating results, Christian Call lost part of his finger. With life-like prosthetics out of the question, due to the price and the fact that none of them really worked that well, Call set out to find an affordable alternative to a conventional prosthetic fingertip.

After browsing YouTube, Call came across multiple videos of 3D printers in action. Call said that it was then that he realized that he had to have a 3D printer. “I felt that with a 3D printer I could explore a whole new level of creativeness,” Call said.

Using an Up Mini 3D printer, Call put his skills to work by creating a prosthetic fingertip.

Call has been working on his fingertip design for over a year and a half, testing out each prototype along the way. He has created a series of different designs, even one that has a magnetic tip. Perhaps best of all, the 3D printed prosthetic fingertip functions like a real fingertip, when Call squeezes his finger towards his palm, the fingertip moves.

Since the invention, many have gotten in touch with Call, asking for help obtaining their own 3D printed prosthetic fingertips. Call has helped multiple people, but also encourages them to branch out on their own, and get creative – the same way he did.

3D printing holds enormous potential, and is allowing affordable prosthetics to become a reality. While 3D printed prosthetics are very much “assembly required,” and appeal mainly to a DIY sector, the fact that 3D printers are able to easily produce prosthetics is a huge step forward. The advancements that this technology has made means that one day, affordable prosthetics may be affordable, and close at hand – for anyone who may need them.