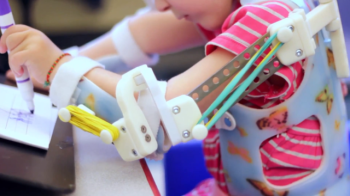 While there is encouraging news about 3D prosthetic limbs bringing hope to other countries, there are plenty of cases where 3D printing is helping American children as well.

Four-year-old Hannah Mohn was born with a condition known as arthrogryposis, a disease that affects muscle strength. This condition limited Hannah’s ability to move her arms due to underdeveloped muscles.

Now, thanks to 3D printing, Hannah is able to use her arms on her own. Hannah can now lift toys and is able to do basic things like eating, as well as hugging

The Wilmington Robotic Exoskeleton, or the “WREX Jacket,” was developed by Tariq Rahman, PhD, Senior Research Engineer at Nemours/Alfred I. DuPont Hospital for Children in Wilmington, Del. The WREX Jacket was originally designed to allow children who had limited mobility, to feed themselves, to play, and of course, hug.

Thanks to 3D printing abilities, the WREX Jacket, which was originally designed for kids who were six and older, is now able to be fit and designed for children under six as well. 3D printing allows these vests to be lighter and smaller.

In 2012, Rahman’s WREX was used to help a two-year-old named Emma, who was in a similar situation. The WREX allowed Emma to lift her arms up under her own strength. Since their success with Emma’s case, the team has printed WREX jackets for more than a dozen other toddlers, one of these toddlers, is Hannah.

“Without the 3-D printer, we wouldn’t be in the position we’re in with these younger kids,” says Rahman. “It’s allowing kids like Hannah the ability to move their arms and even flick a rubber band.”

According to 3Ders.com, WREX Jackets are constructed from lightweight plastic and rubber bands. They can be custom-made overnight with the use of a 3D printer. “If you do the geometry right and you put the bands in the correct place, you can get this floating sensation for a kid,” said Rahman.

“Some of our world’s greatest ideas are being 3D-printed,” said Scott Crump, chairman and CEO of Stratasys. “Engineers want their technical work to connect to a greater good, and 3D printing is helping them bring their ideas to fruition to improve lives and the world around us. As more people become aware of the possibilities of 3D printing, its impact outside of traditional manufacturing and design realms will continue to grow.”