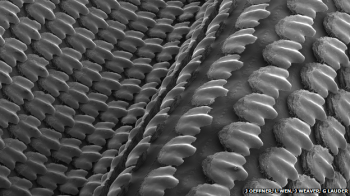 Harvard scientists have recreated shark skin, and in the process have discovered that the structure of the skin can actually increase shark swimming speeds by 6.6 percent.

If you were to ever get up close to a shark, you would see that its skin is covered with millions of tiny tooth-like scales, known as denticles. The denticles allow the shark to travel at faster speeds by disrupting the flow of smooth water that holds them back. The process is similar to the dimples on a golf ball, which allow it to travel faster and further.

Scientists don’t know exactly how this process happens, but George Lauder from Harvard University and his colleges were determined to find out and decided to try to create artificial shark skin.

Until recently, the denticles on a shark’s skin have been too difficult to recreate. Until 3D printing, that is. Lauder and his team used the skin from a mako shark and used a combination of 3D scanning and 3D printing to create the artificial skin.

The challenge came when the scientists tried to manufacture the synthetic skin – with thousands of denticles to imitate the skin of a shark. The whole process took around a year and involved testing different materials, printing prototypes, and adjusting the denticles.

The artificial skin impressed Oliver Crimmen, a fish expert at the Natural History Museum. The team tested the 3D printed shark skin by putting it on a small flexible paddle and was able to see the benefits that sharks get from their unique scales. The paddle with the shark skin improved swimming speed by 6.6 percent, using 5.9 percent less energy when compared with a paddle with a smooth surface.

“That’s a huge effect, when factored over the entire lifetime of an animal that is constantly swimming,” said Prof Lauder.

However, Lauder says not to expect the shark skin to be on swimming clothes in the immediate future. While it improves your swimming performance, the process that is required to recreate the skin is so time consuming that it may be years before we start to see shark skin flippers and swimming gear.