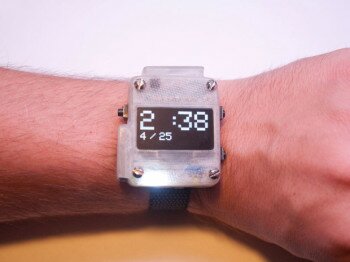 Jonathon Cook’s goals were ambitious: to build a watch that had more functions than your everyday watch.

Among other details, Jonathon wanted the watch to have plenty of program memory and enough battery for at least one day. And of course, in order to be functional, the watch had to be a compact size.

Jonathon built his 3D printed OSWatch from the ground up and his project won the MakerMedia Arduino Build Competition. His OSWatch will be displayed at Maker Faire in Rome this fall.

Jonathon has a background in product driven development. This combined with the fact that he is a big fan of learning through building, enabled him to set out to design and build the 3D printed smart watch. For nine months, Jonathon worked on the development of his watch. The back, face, frame, ports, and strap were all 3D printed using a Printrbot Simple.

But the watch isn’t just your ordinary watch that can tell time and occasionally double as an alarm. The OSWatch consists of 3 small boards, a microduino core +, a Bluegiga ble112 chip, a voltage regulator, and a 3D printed case. It also has email, Twitter, and Facebook capabilities.

Jonathon hopes that over time, he will have a community to help further his projects platform. “I see this first as an open source “pebble” type project,” Jonathon said. He is currently looking for members to join his team at oswatch.org, to create a small group of people to get the Open Source foundation up and running.

Jonathan has shared the parts and tools list on his website, as well as instructions on how to build your own open source watch.