I had a remote controlled airplane once. I never got to fly it. My dad bought it for (himself) all three of us brothers for Christmas, and after he (my dad) flew it for a few minutes, my oldest brother crashed it beyond repair in the eight seconds that he held the controller. It was an awesome experience. I’ll never forget how graceful the lunge to the glinting sun and the following stall were precisely executed into a blurred nosedive. Though Steven Easter and Jonathan Turman, students at the University of Virginia, very likely experienced some nosedives themselves, that didn’t stop them from receiving an internship to design a 3D printable unmanned aerial vehicle (UAV) and succeeding in the task. 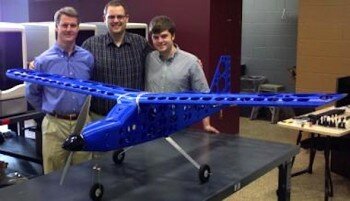 After catching the eye of defense contractor Mitre Corporation by posting a video on YouTube of their submission to the Rolls-Royce sponsored class project of assembling a 3D printed replica of the turbofan engine, these two gentlemen were offered the internship to do the same with functional UAVs. Along with their engineering professor from the turbofan project, 20-year veteran of the aerospace industry David Sheffler, the group worked to create a UAV with a 6.5 feet wingspan from 3D printed pieces. They did it, of course. With four test flights, their craft flew over 40 mph. The US Army and Mitre had witnesses present for the fourth successful test flight and they liked what they saw. 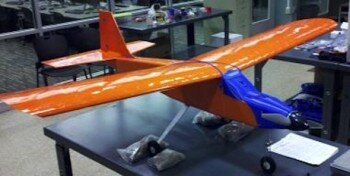 The internship has been extended for the purpose of reducing the weight and complexity of the design, which would improve performance and lower costs. It makes sense that students were chosen from the University of Virginia, as students there have access to several professional 3D printers, including a Stratasys Fortus. The increasing presence of 3D printers in educational facilities has been addressed previously, and it’s a predictably consistent trend. If the future of manufacturing is to be heavily impacted by 3D printing as is the prediction, the students of today will need to be comfortable with the technologies of tomorrow.

Extra: Here’s the video of the 3D-printed replica of the turbofan engine I spoke of above: