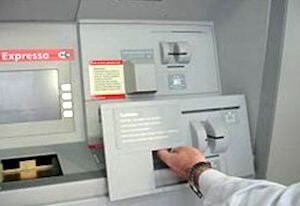 Is your ATM the real thing, or a 3D printed card skimmer?

We know that 3D printers will eventually take over the manufacturing of just about everything, but we didn’t think that we see criminals find a use for them as early as 2011.

Last week the blog Krebs On Security brought to light how an ATM skimmer gang used 3D printers to create the skimmers and steal over $400,000 from ATM machines. And we thought that the first criminal use of 3D printers would be to print perfect hundred dollar bills!

First of all, what’s an ATM skimmer? It’s something we’ve learned that you had better be on the lookout for, that’s what! They are handcrafted, custom made overlays that can be popped on to an ATM, typically fitted over the card slot, so that when you swipe your card, it swipes your card’s details. With your account number and PIN in the criminal’s hands, the next step is for them to withdraw money from your account with a quickly reproduced ATM card.

The skimmers come in all shapes and sizes and with their own devious way of working. Krebs has a page on quite a few skimmers he’s seen and you can take a look at them here.

Let’s get back to the 3D printing part of this story. As you can imagine, it must be a laborious process to handmake an ATM skimmer for each particular ATM machine, and then each subsequent copy. As we know, criminals don’t particularly like the idea of working, so one of them figured out that they could get a hold of a 3D printer to do most of the work for them. With some photos and measurements of the ATM machine’s interface, and a CAD/CAM three-dimensional modeling program, a revolution in ATM skimming was born.

In fact, even if an aspiring gangster is short of the funds required to buy their very own 3D printer, they can attempt to do what any of us with a plan for a 3D object can do: upload the file to an online 3D printer service to print it for you.

We hope that all the online services’ employees are as alert as those at i.materialize.com was last summer when they received an order to print an ATM skimmer. We don’t know if the client labeled his order “ATM Skimmer” or not, but regardless, the engineers were quick to recognize what the final device resembled and declined the order.

According to Krebs, the skimmer gang was paying between $2,000 and $10,000 per traditional ATM skimmer kit. We’re assuming that they need one for each different model of ATM machine. Being the entrepreneurial businessmen that mobsters are, they calculated that spending $5,000 to $20,000 for a desktop 3D printer of their own that can then make skimmers for every ATM model would be a very good investment. Here’s how i.materialize’s Franky De Schouwer explained their possible thinking to Krebs:

“Just looking at the idea of 3D printing a potential skimming device, a criminal could invest in buying a desktop 3D printer. Not a kit printer in the line of a Makerbot or a RepMan but a desktop printer of a high end manufacturer of 3D printers like Objet, 3D Systems or Stratasys (HP). You could get one of those between $10,000 – $20,000 and they will print a high quality skimming device that, including some post finishing, will look like the real thing.”

Now that word of this new criminal business model is out, look for the cost of ATM skimmer kits to plummet as the price of ATM skimmer CAD/CAM files go through the roof.