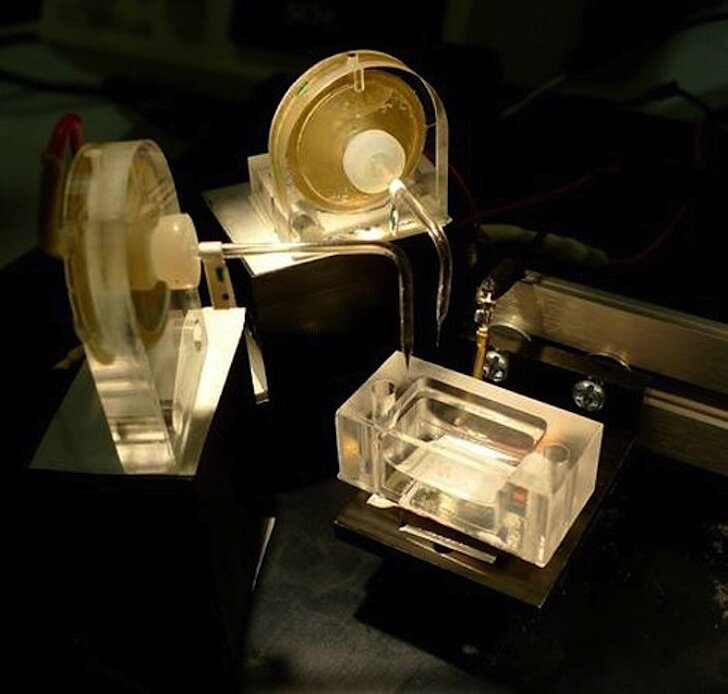 Makers are coming up with all sorts of material to 3D print with these days. But here’s a material you’ve probably never thought of: water. I know, it sounds funny, but it’s real. It’s a fascinating new experimental technology found in the labs at the University of Oxford, and it holds much promise in medical applications.

The video by Chemical & Engineering News that is shown in this article does a fabulous job of explaining how researchers at Oxford are creating liquid objects — you read that right, liquid, not solid — by using a 3D printer to assemble together 50 micron water droplets. In a nutshell, the custom-built 3D printer squirts the lipid-coated water droplets through its nozzles onto a platform that is submerged in an oil bath. Normally, water droplets would combine into a larger drop, but the oil-water repulsion keeps the droplets from fusing together, and instead the droplets “‘kiss’ to form a very thin bilayer interface.”

Of what practical use is this? Drug delivery for one. As you’ll see in the video, they’ve created a flowerlike network of droplets that curls into a sphere, thanks to osmosis. This, they say, could be used in drug delivery systems of the future.

There is also the possibility to use this technology in tissue engineering. One of the methods of creating human tissues today is to create a scaffold structure onto which cells are be placed as seed, to replicate. With water droplet printing, a scaffold could be printed by assembled water droplets already populated with cells.

Bioengineering with 3D printers, bioprinting, is an aspect of 3D printing still unappreciated by most. But it will literally change (extend, improve, save) your life in the future.