I was super excited to do 3DPrinter.net’s first review of a 3D printer. Because Aleph Objects Inc, maker of the LulzBot, is about an hour away from me, I offered them the opportunity to receive our first review and they were kind enough to trust me with their latest printer, TAZ. When I arrived at their Loveland, Colorado headquarters, Rod Strand gave me a tour of the botfarm, where 40 LulzBots print custom parts for more LulzBots 24/7 for weeks at a time, producing some 2,000 parts a week. It’s a factory that takes up the space of two shelves. A few in the farm are TAZ, the fourth generation LulzBot. Besides a much larger build volume, other improvements over the AO-100 include reduced Z wobble and a faster heating bed.

Here are its stated specs:

The TAZ was very nicely packed in a sturdy box with custom styrofoam supports. While it’s a fully assembled printer, the bed is removed for shipping so some simple assembly is required. It only took a few minutes; I spent more time rereading the instructions. There are four bolts that hold the bed/Y carriage to the frame, four wires to plug in, and done. 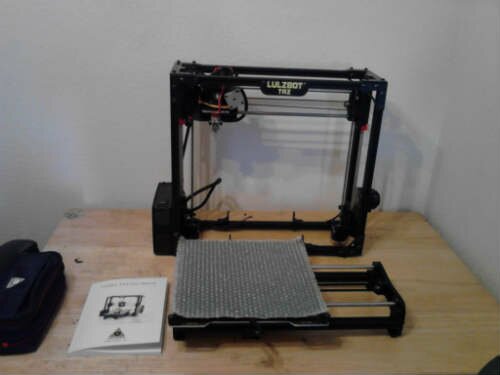 TAZ right out of the box 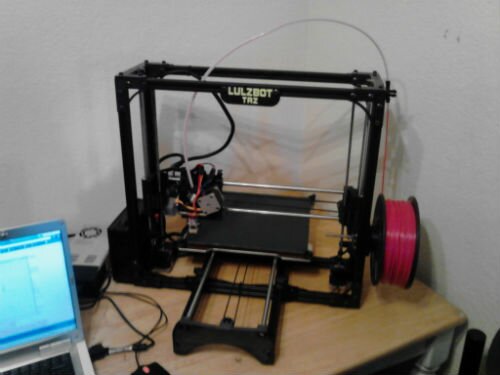 It comes with all the tools you’ll need: pliers, tweezers, a clam knife, Allen wrenches, a X-Acto knife, a fine pick, a ruler, and an acetone-safe bottle. The Allen wrenches are used for leveling the bed and tightening the various bolts, but the latter wasn’t necessary; the construction was sturdy and calibrated.

Leveling the bed is easy enough, though it took a moment. The bed does heat up pretty quickly too, maybe five minutes. After printing the calibration print a couple times, I got it homed in. I initially tried printing directly onto the heated bed, and it stuck, but it consistently curled. Then I used the recommended “Lulzjuice” (acetone-ABS slurry) and the curling went away. I’ll note that the manual states that the bed should be 110 degrees for ABS printing, but the forums are more up to date with 85 degrees. After printing a functional piece that my brother designed, I moved on to the obligatory MAKE Torture Test. To really put the printer to the test I used fairly high speeds of 120mm/s and thin layers of 0.15mm. It did well, except for the bridging where the arc failed. At that speed it makes sense. So I printed it with supports and it came out great. 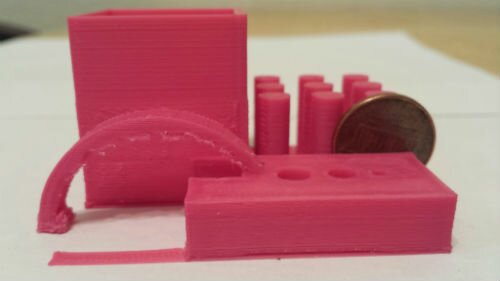 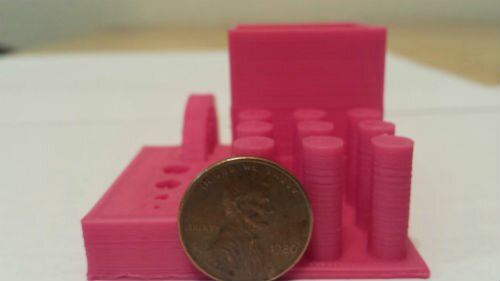 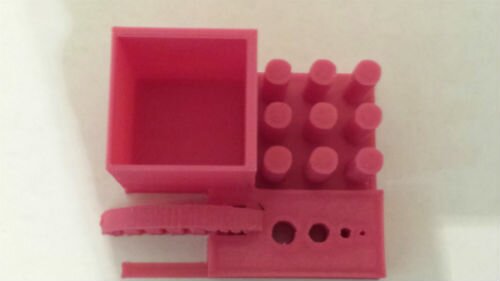 The supports removed quite easily, and the bit that’s left could easily be removed further and then smoothed out with acetone. But you can see there’s no stringing on the pillars and the holes are clean; you can see all the way through the smallest one. It’s clear that I could have slowed the print speed down and printed without supports and at a finer resolution, but I set a fairly short time for myself to have the printer (about a week) and such prints would have taken more time than I had.

Still, I wanted to see what the TAZ could do. I’d been using Slic3r configuration files that LulzBot supplies, with minor changes, so I used a high quality setting and tried for a 0.1mm print. 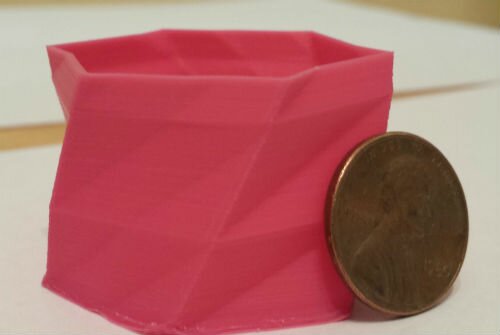 That’s a wonderful vase. The TAZ is supposed to be able to do 0.075mm layers though, so I had to try. 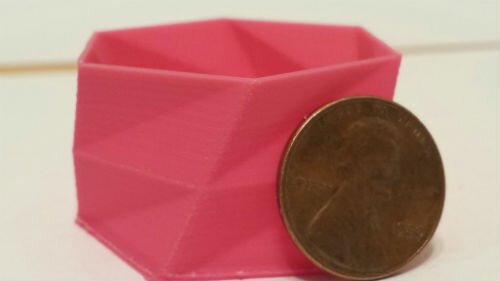 Bam. Beautiful. The layers are barely visible. A small amount of finishing could clean up the bottom, but they’re wonderful prints otherwise. 75 micron layers usually takes much calibrating, but the TAZ does it almost right out of the box. I was impressed.

One of my favorite things about LulzBot is their open-source nature. LulzBot received the first ever certified Open Hardware “Respect Your Freedom” award from the Free SW Foundation, and all of the software used in house is free and/or open source. Because the TAZ is open source, the community can more easily refine and upgrade the system. As such, TAZ can support dual extrusion upgrades, a larger build volume, and auto bed leveling, all of which have been implemented by users.

As this is the first review, I won’t be giving ratings like 8/10 for speed, user friendliness, quality, etc. I’ll need to review a couple more before I can have a basis for comparison. Instead, I’ll briefly describe my experience. The TAZ was very easy to set up and operate. It prints fast (I did 175mm/s), and it produces beautiful prints. The only issues I had were a bit of inconsistency with the Z-stop homing and getting the tension on the extruder just right. Overall though, the TAZ was a delight to print with.

Cameron, Senior Staff Writer, is a technology enthusiast that can better write about 3D printing than he can ride a bike. His interest in 3D printing is mostly driven by his desire to become a cyborg. He enjoys philosophical conversation and is also fond of poetry and Star Trek. Connect with him on Google+. View all posts by Cameron Naramore »
« “Suspended Depositions” — a wild new 3D printing process that comes with an Undo
Printing guns and medicine in three dimensions »