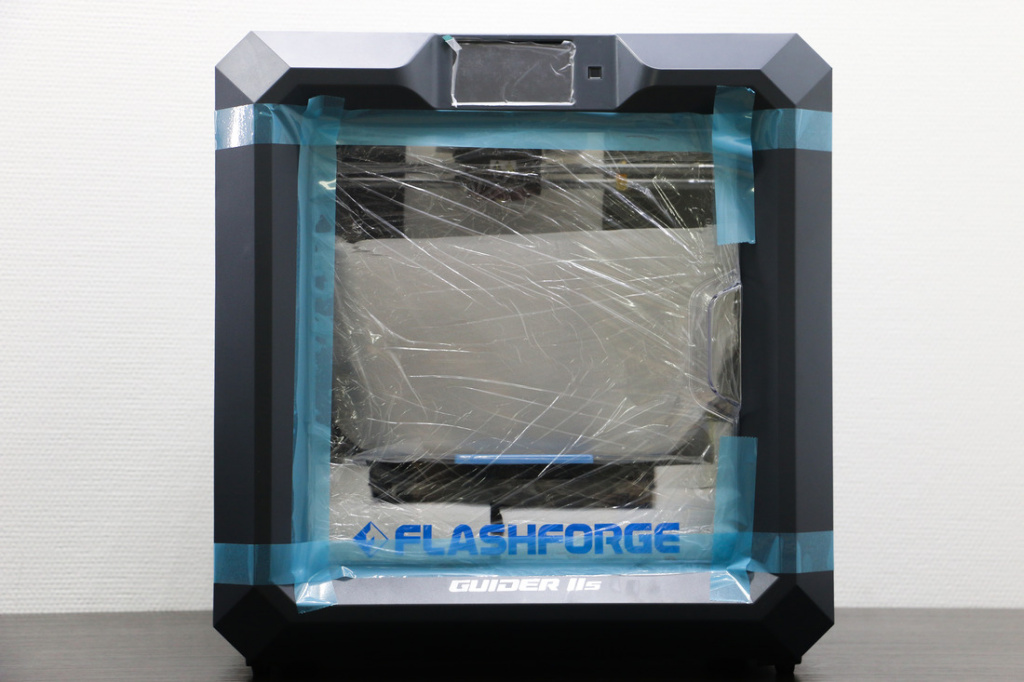 FlashForge Guider 2S 3D printer review – According to the FlashForge team, this is an “industrial grade” device. Is it so? Find out in this article!

Another device – another review. Today we will talk about the FlashForge Guider 2S 3D printer – what’s new in it compared to the previous version of the Guider 2 and how well it’s done.

Designed and produced by the long-established FlashForge team, the Guider IIS (2S) is advertised as an “industrial grade” single extruder 3D printer. The device is based on the previously released Guider II model and has a number of improvements that increase user comfort.

The all-metal body weighing 30 kg is as rugged as ever, and the transparent polymer door provides access to the working chamber. What’s more, there are virtually no plastic parts throughout the printer, except for the extruder housing and fans. 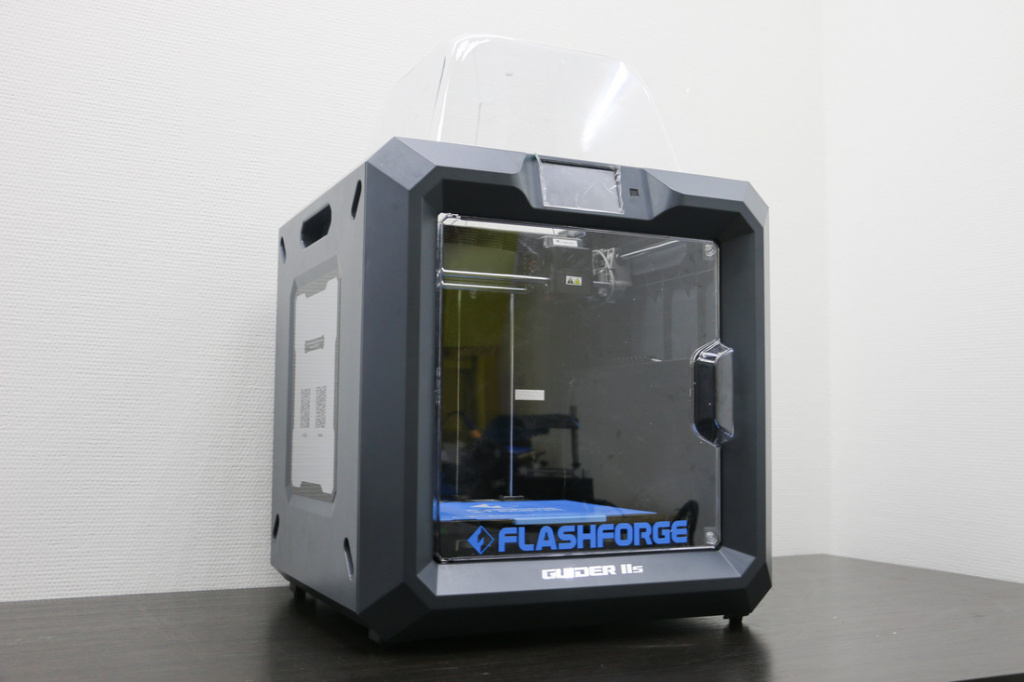 Guider 2S has a solid 250x280x300mm print volume, complete with a workbench heated to 120℃. The printer is also equipped with an acrylic top cover that completely covers the print chamber, providing precise temperature control. 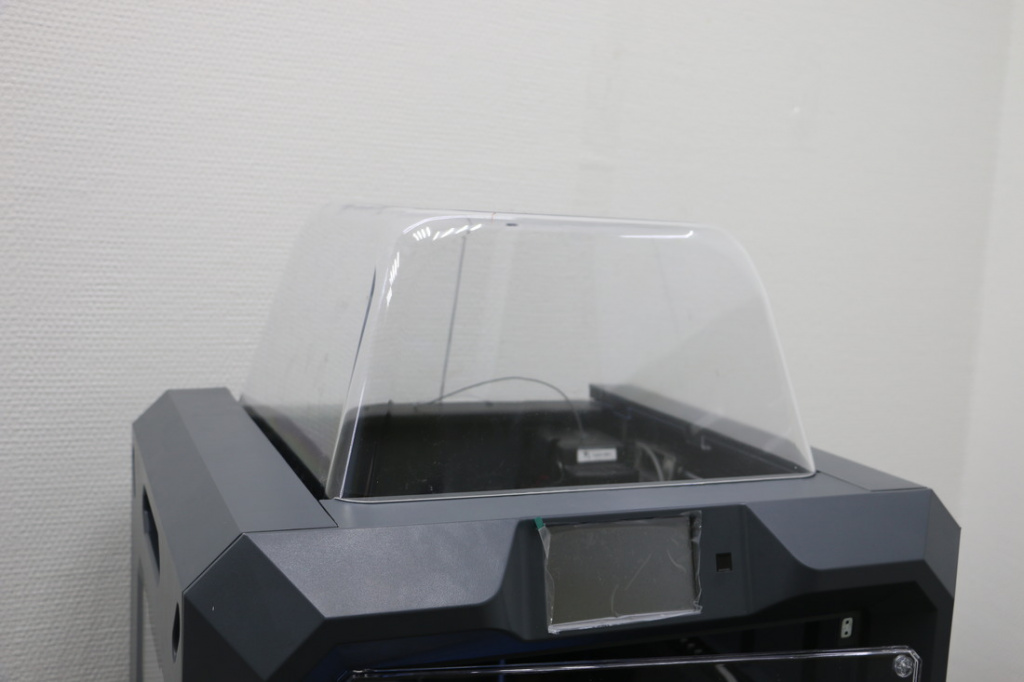 The only extruder has a maximum nozzle temperature of 300℃ and a maximum print speed of 150mm/s. The Guider 2S is compatible with many different filament manufacturers, including materials such as PETG, HIPS and PC. 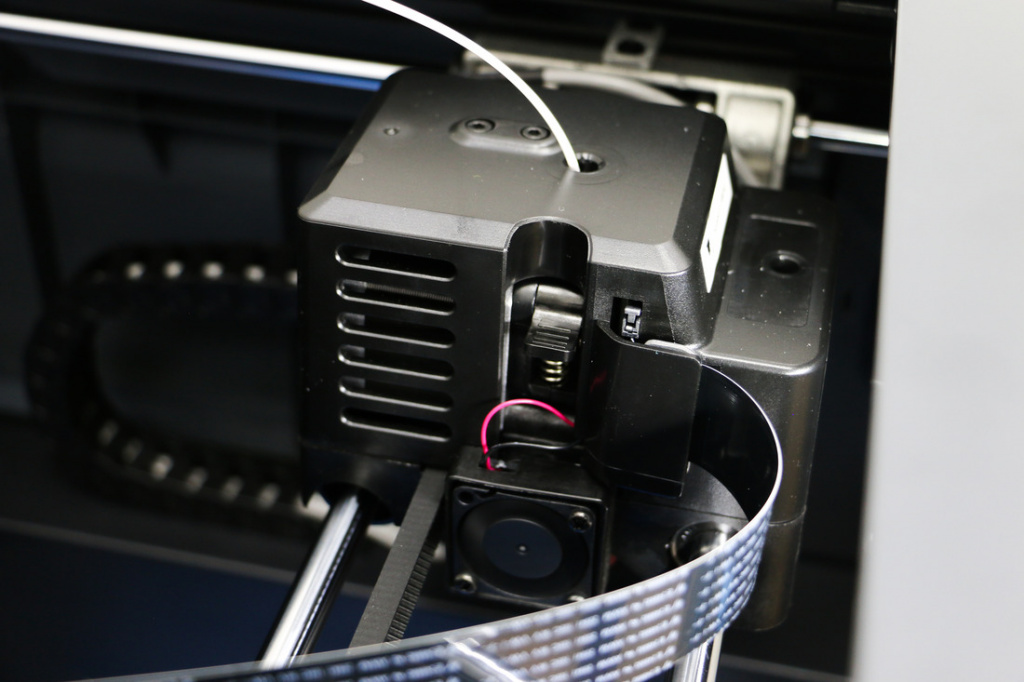 To our, and subsequently your delight, the printer is packed with everything you need to get started. FlashForge includes a set of five nozzles (0.3 mm, 0.4 mm, 0.6 mm, 0.8 mm and an additional 0.4 mm hardened steel nozzle for carbon fiber filament printing). In addition, the kit includes a 1 kg spool of white PLA, a 16 GB USB-drive for model storage, and even a glue stick.

The printer itself has a large size – 550x490x570 mm, but not so large that it does not fit on a standard table. Handles on both sides of the frame make it easy to carry.

The external coil holder is located on the back where it won’t be conspicuous. 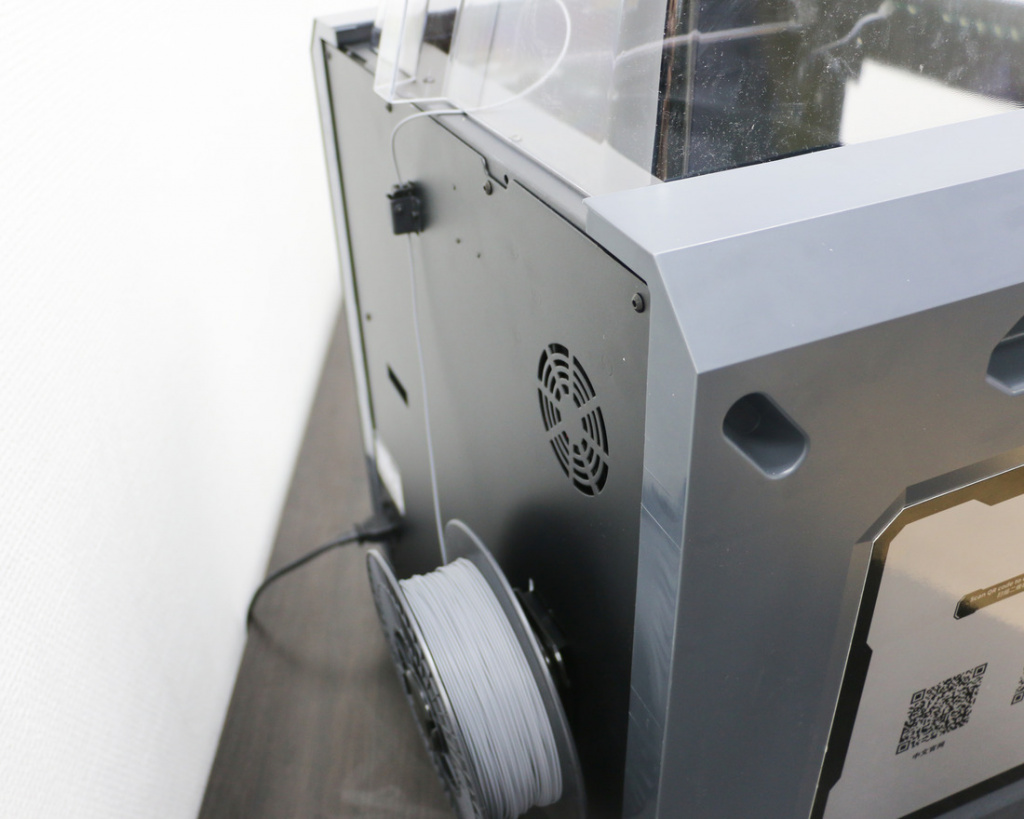 A closer look at the device reveals a built-in HD camera for remote monitoring of the printing process, a HEPA air filter for safer indoor operation, and a filament sensor – none of which were present in the original Guider II. 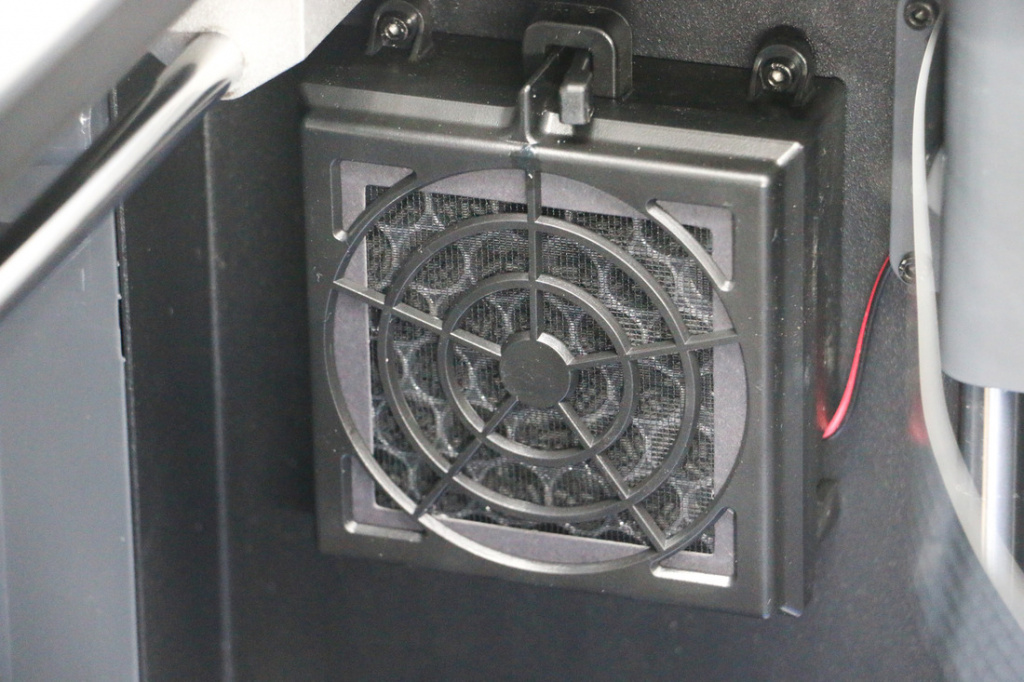 It’s worth noting that the base printing surface is made of glass, with a stainless steel magnetic overlay and a matte plastic sheet. While the plate provides better model adhesion, it is by no means mandatory and can be easily removed. This is especially useful for users who need smooth part bases, as this can only be achieved with a flat glass surface. 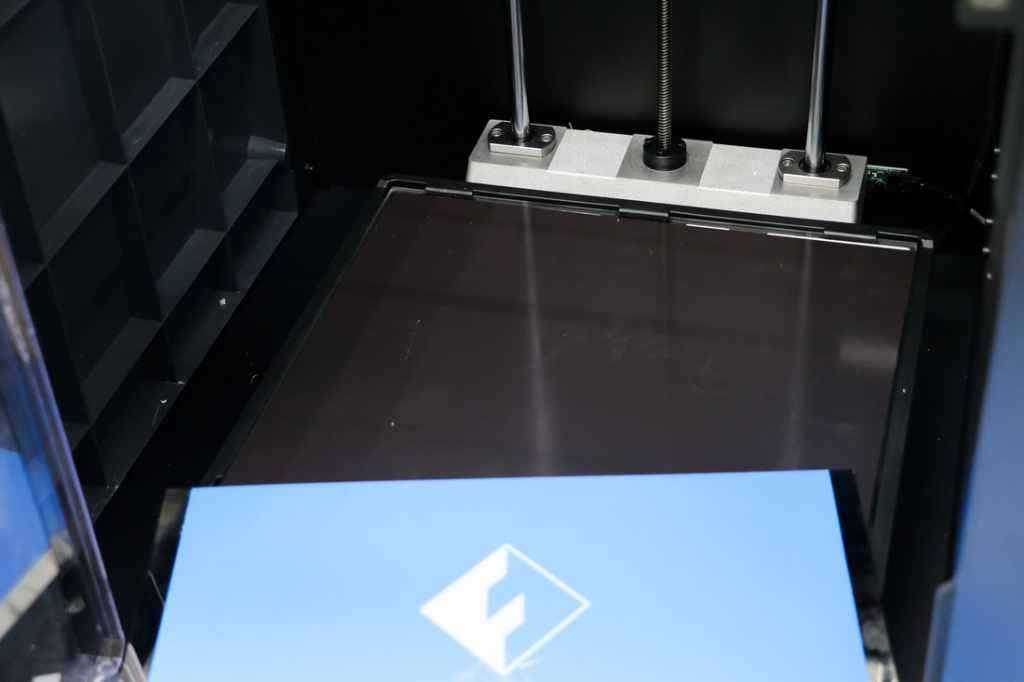 The 5-inch color touchscreen on the front of the printer makes it easy for the user to set up and then operate the device. 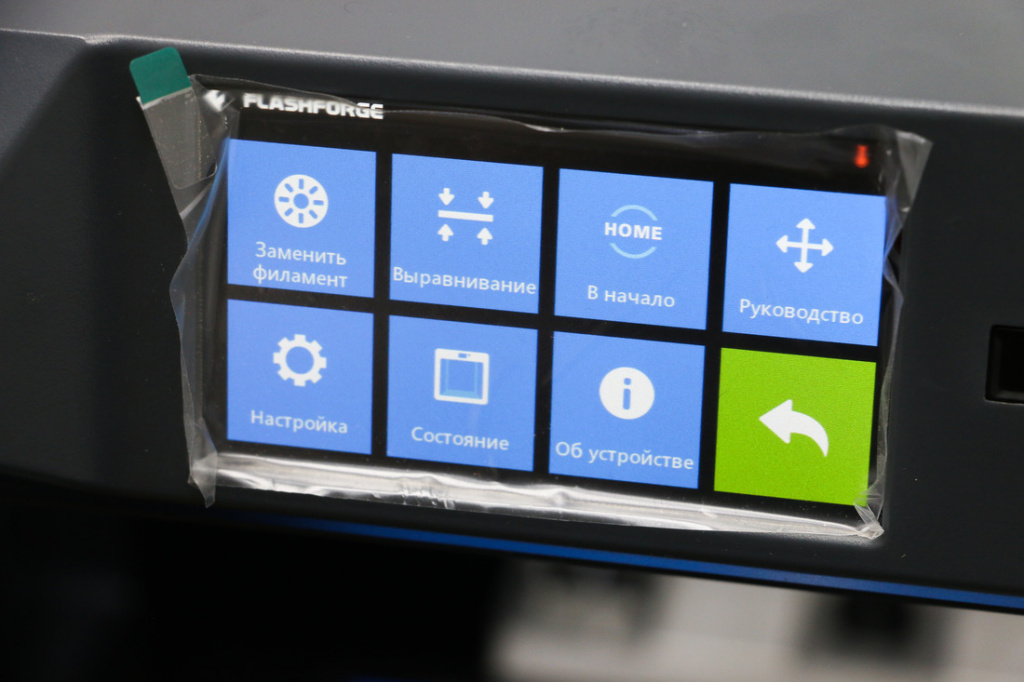 As for platform calibration, FlashForge chose a three-screw alignment system where three screws under the platform control its height. The FlashForge Guider 2S uses a nine-point platform leveling system, and the touchscreen tells the user which screws to turn and by how much. As soon as the built-in sensor gives the go-ahead, the user can start printing. 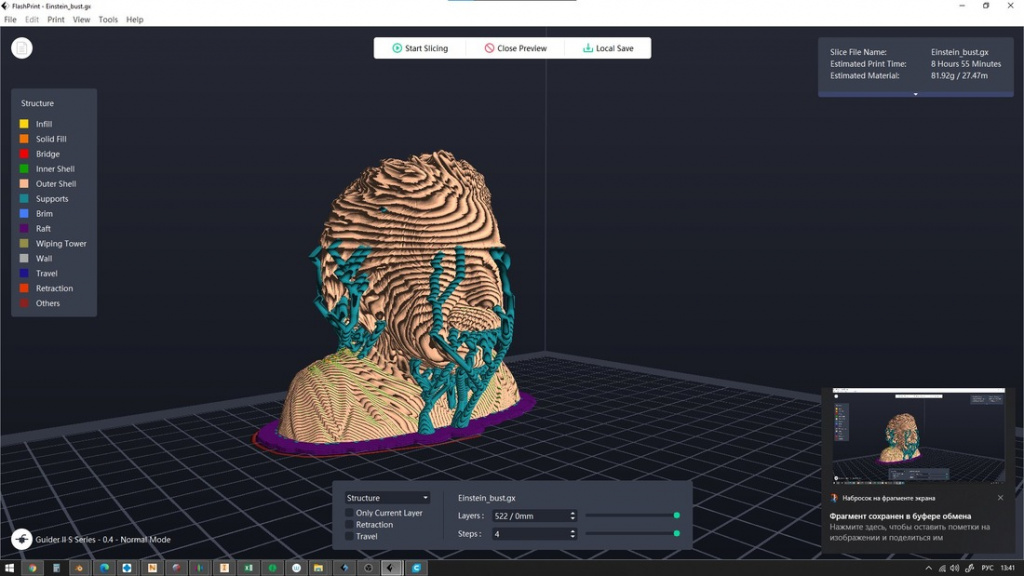 Not surprisingly, FlashForge has once again provided its own slicing software – the FlashPrint slicer. The sleek, minimalistic user interface looks pleasant as always, with each individual element clearly marked and distinguishable. The model manipulation screen itself is clean and large. 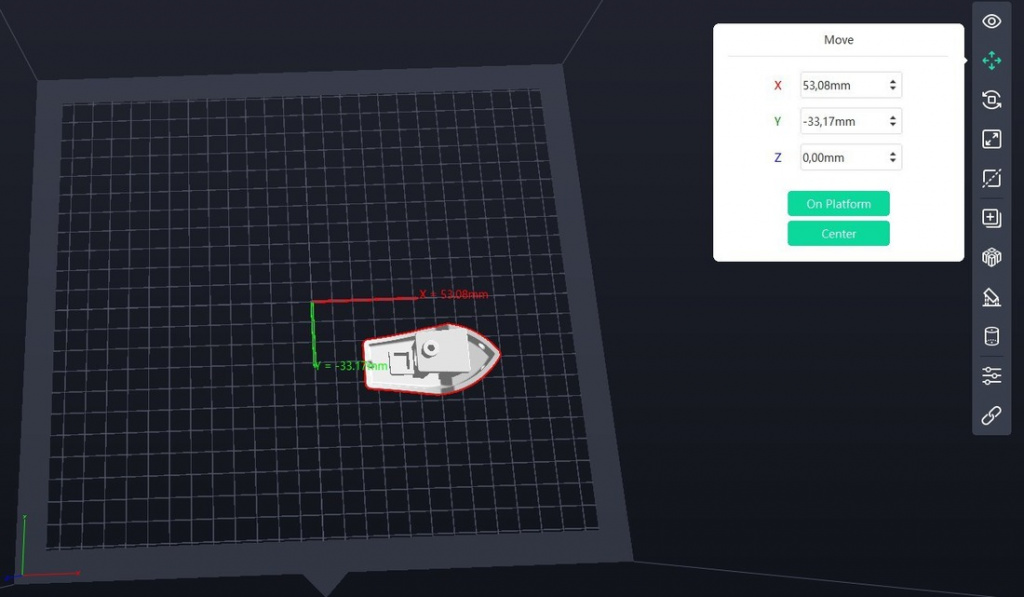 The basic functions are intuitive and responsive. Once the model is placed on the virtual printing platform, the user is given the option to select one of two types of supports: linear or tree-like. The support structures can be automatically generated to save time or added individually in a more precise way, both work well in most situations.

Expert mode is also available for 3D printing veterans. In expert mode, users have access to a full set of printing parameters for maximum control over the process, including speed settings, fills, and cooling profiles. Once the model is sliced, it can be transferred to the printer via USB, Wi-Fi, or Lan cable, as well as via Polar Cloud.

It’s worth mentioning that in general the Guider 2S is very easy to connect to a computer via Wi-Fi. During the test print, we didn’t have to use a USB drive or any data wires at all.

It was time to put the Guider 2S to the test to see if the “industrial grade” label was true.

The Guider 2S performs well during operation, printing starts and stops exactly where it should, resulting in clean, detailed prints.

The extruder is cooled sufficiently so that the parts don’t warp or deform.

Even complex models come out with smooth curves and invisible layer lines, even though you might have to replace the filament if you print large models (good thing the filament sensor doesn’t fail). The Guider 2S has done a fantastic job of preserving the fine details and intricacies of the models.

In the end, we are of the opinion that the Guider 2S can be called a FlashForge classic. The manufacturer has an almost perfect track record of quality devices, and the Guider 2S is no exception. That’s how a quality new model should be made – keep what works and add what’s missing. Adding a camera, filament sensor and HEPA filter makes the system a dream to work with, all wrapped up in a robust FlashForge design.

If we talk about the drawbacks of the printer, the few that we found are minor. The Z-axis driver is pretty slow and can be noisy, so be prepared to lose about 30 seconds here and there. We also wish the calculated print time was a little closer to the actual time (it was ~9% less). Despite the fact that FlashForge wants you to work with their slicer, FlashPrint is not a concern – the proprietary software is all you can ask for, whether it’s your first printer or your tenth. 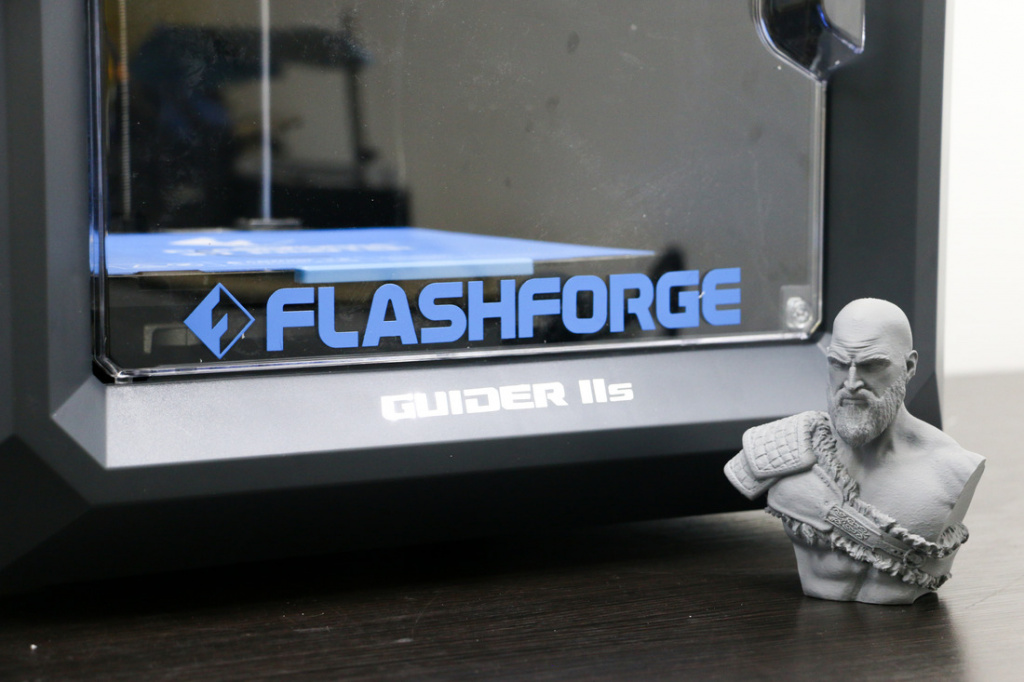 If the 3D printing industry had a seal of approval, it would undoubtedly be put on the FlashForge Guider 2S.

3D Printers Reviews 0
The FUNMAT PRO 410 is an industrial 3D printer with a large build volume.