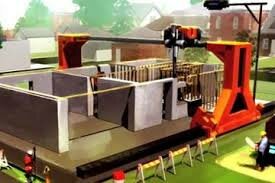 Construction projects that drag on for months may soon be a thing of the past! The news that a 2,500 square foot house can be “printed” in 24 hours with a 3D printer has the world abuzz.

The idea is that the technology, known as Contour Crafting, may very well reduce energy use, by using a 3D printing process to fabricate much of the house, eventually including electrical and plumbing.

The 3D printing robot, designed by Professor Behrokh Khoshnevis of Southern California, is equipped with a nozzle that spews concrete and can build a home according to a computer pattern. Khoshnevis has explained that this process is “basically scaling up 3D printing to the scale of building.”

Brad Lemley, of Discover Magazine, explains how the system works. Workers lay down trails and the robot, or 3D printing process, operates from there. While the finishing touches, such as doors and windows, would need to be finished by humans, the 3D printing process can do a majority of the work, making the construction process easier and faster.

3D printing homes could help to reduce costs, and improve the process in which homes can be repaired. It could also be used to rapidly construct replacement housing for disaster relief areas where homes are destroyed by storms, hurricanes, or floods.

For now, the project of 3D printing homes is still being tested. But it is something that many view as a viable prospect for the future.