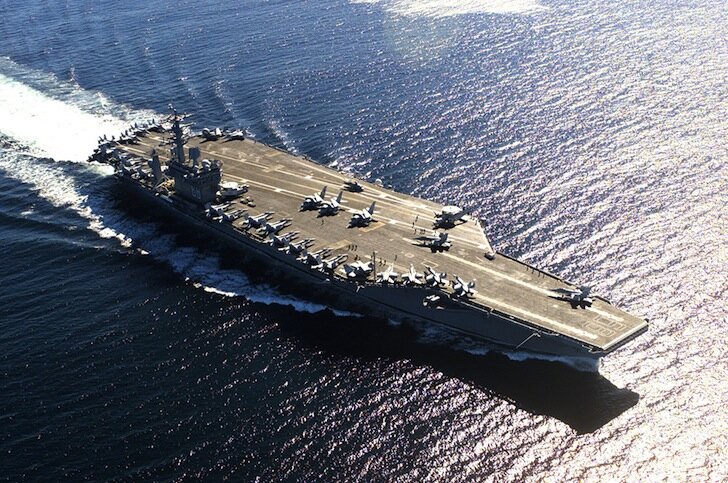 One of the greatest advantages to using 3D printing is cheaper and faster prototyping. Various metals are possible too.

The Rapid Equipping Force and the Expeditionary Lab — Mobile have been in service for years, producing new components for the American military in the field when and where they’re needed. Printable UAVs are being developed through funding from the Army, and the Air Force has contracts with 3D Systems to print parts for F-35s. In these cases using 3D printing solves issues of complex geometries, reduced weight, and portability of manufacturing. There are also cost reductions associated with additive manufacturing as there’s less waste produced.

While it’s not on boats yet, Lieutenant Commander Michael Llenza recently speculated in the Armed Forces Journal about 3D printing in the Navy. He starts, “Three-dimensional printing, a fast-moving technology that is still in its infancy, promises to upend the way we think about supply chains, sea basing and even maritime strategy.” Clarifying that it’s years off, he speaks of the possibility of a “distributed global production network in which sailors and Marines send an email with a digital scan or design for a part they need and have it created at the nearest certified printer. Thinking bigger, the fleet might convert some Military Sealift Command ships into floating factories that can take print-on-demand orders from the battlegroup.”

Floating factories sounds rather steampunk, but considering that nuclear-powered supercarriers can go years without refueling, it makes sense to put production facilities in the sea to keep them stocked. Llenza writes “An organic ability to print replaceable drones from ships, forward operating bases or during disaster relief operations to serve as targets or observation platforms could be a huge enabler for sailors and Marines.” Such an ability could save a lot of time and money by removing shipping and airlifting expenses.

Llenza doesn’t forget the human component of maritime operations. He mentions that sailors are already having prosthetics printed for those unfortunate times of lost limbs. But he says there’s more to come: “Medical enhancement through bio-printing is one potential area of interest for the military; others include printing nonrejectable skin and bone grafts that subject the patient to much less trauma. Or on-site medical care where removal of the patient is not feasible or safe. Or testing the effects of bio-terrorism agents and irritants on lung or skin — and even developing printable drugs and vaccines.” After all, the first 3D printed bionic ear was just recently created.

Sailors have to eat, and to illustrate that galleys could also be equipped with 3D printers, Llenza cites the time when Modern Meadow’s Gabor Forgacs ate a piece of bioprinted pork. He quotes Winston Churchill, “We shall escape the absurdity of growing a whole chicken in order to eat the breast or wing by growing these parts separately under a suitable medium.” Tasty.

This may all sound radical, but it’s necessary. China is researching 3D printing for similar uses, so it only makes sense that America does the same. Who knows, maybe we’ll be printing entire fleets eventually.