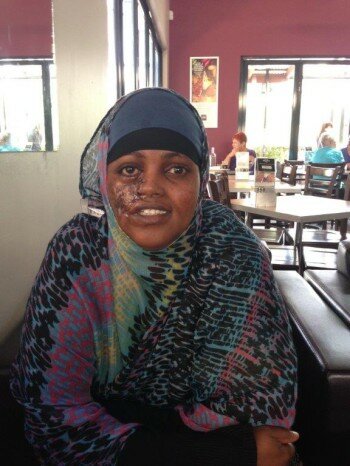 When she was just two years old, Ayan Oma Muhumed was caught in cross fire during the war between Somalia and Somaliland. Tragically, a bullet struck her face and ripped through her cheekbone, causing devastating damage to her face. While doctors at a refugee camp were able to save her life, the injury left her unable to eat or drink properly, and her eyes could never shut right. Ayan would spend the next 23 years hiding her injuries under a niqab, and much of her life was a misery.

Five years ago, Edna Adan Ismail, Somaliland’s former first lady and the founder of the only maternity hospital in Somaliland, put in an appeal for medical assistance to help reconstruct Ayan’s face, and help heal some of the scars left by the war.

Just last month, Ayan underwent extensive surgery at The Wesley Hospital in Brisbane. The surgery lasted nearly 11 hours and took approximately 20 different surgeons, nurses, and various staff – all of whom donated their time and services.

The surgery was completed using 3D printed implants used to rebuild Ayan’s eye socket, cheek, and missing portions of her jaw. Skin grafts were made using skin from her neck and cartilage from her ear was used to rebuild her nose.

Dr. John Arvier and plastic surgeon Dr. David Chin say the surgery went exactly as planned. After her surgery, one of the first things Ayan did was refuse her niqab.

While Ayan’s progress will continue to be monitored, she walks with a new confidence and says she wants to go back to school – to become a doctor.