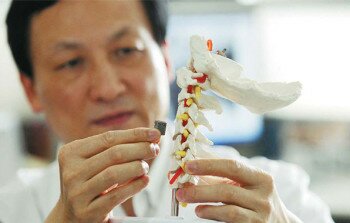 Doctors in the Guangdong province of China have just completed a complex bone fracture fixation surgery, aided in part by 3D printing technology.

The 43-year-old patient, a man with the surname of Zhang, had fallen from a height of about 3 meters above the ground. The fall severely injured the right side of his hip bone, which required complex surgery to repair.

The required surgery, known as “acetabular open reduction surgery,” would normally have involved making a 20-30cm incision – which could cause a great amount of blood loss. This time, however, Professor Zeng Shenjun, and his orthopedic trauma team, created and 3D printed a pelvic model of the patient before surgery.

The 3D printed models allowed surgeons to prepare for the surgery better, by allowing them to practice on the models first. This allowed them to create a plan for surgery, based on the preoperative surgical simulations.

The surgery was remarkably fast; it only took one hour, and required a small incision which resulted in only 80 ml of intraoperative bleeding. “With traditional procedure, the bleeding would be at least 1000 ml.” said surgeon Jin Dadi. “3D printing helps to reduce the medical errors and the suffering of the patients drastically.”

The surgery was a success, and the patient responded to it well.