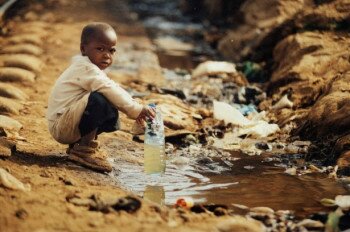 Getting a fresh glass of water is something that most of us don’t think twice about.

For many people in underdeveloped countries though, access to fresh drinking water is a privilege that they don’t have.

Make Fresh Water, a website that is trying to combat the problem of inadequate drinking water, has added 3D printing into its equation to make fresh drinking water more available to others around the world. “With the 3D Printing technology we have now the chance to make fresh water all over the world,” the website says.

The idea behind the 3D printed device is to make a green house, of sorts. By putting water in the “body” of the device, and then putting a special cone shaped funnel over it and allowing it to sit in the sun – the hotter it becomes, the more the water will sweat, which causes it to evaporate and cause condensation. This separates the fresh drinking water from the impurities and causes it to run down the sides of the funnel into a container.

The mastermind behind this idea is Cem Schnitzler, who started the project in hopes that someone would be able to 3D print these water purifiers and give them to people in third world countries who don’t have access to clean drinking water. Schnitzler shared the files on Thingiverse, making it possible for anyone to easily download and 3D print the files; helping to bring safe drinking water to those in need.