According to their Kickstarter campaign, MOYUPI says the children are limited by only their imaginations and they will work hard to make their ideas come to life.

“Kids can draw any fantastic creature that comes into their minds,” the company promises. “It can be a monster with robot arms, a ninja princess or even a double headed zombie, whatever. The more original the better!”

Once the kids finish their 2D drawing, it is up to a team of artists to turn the image 3D.

MOYUPI founder Juan Ángel Medina said in an email to PSFK that the artists try to get into the minds of the kids.

“‘How did the kid imagine his Moyupi?’, ‘is that an arm or a horn?’, ‘is this element part of the shape or just something drawn on it?,'” he explained. “These questions aren’t always easy to answer, so we need to put our minds in a kid-like state to imagine what the kids wanted to portray and design it in the most accurate way.” 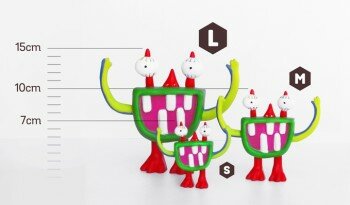 So far, the Moyupis [the name of the company and the kids’ creatures] are available in three sizes through the Kickstarter campaign, but Medina hopes to expand into a  a video game, YouTube series and hopes one day his Moyupis will be rubberized and articulated.