At the moment there are only three U.S. based “pure play” 3D printing companies that are traded publicly:  3D Systems (DDD), Stratasys (SSYS), and ExOne (XONE).  I thought I’d take a closer look at ExOne which had an Initial Public Offering at $18.00/share by sole underwriter FBR Capital Markets.  The stock began trading on 2/7/2013 when it gapped from the IPO price of $18.00/share to open at $23.90 with a close of $26.52, and was the highest gainer across both the NASDAQ and NYSE for the day.  Since then XONE has been the best performing IPO of 2013 and has far exceeded gains in DDD and SSYS for the comparable period. 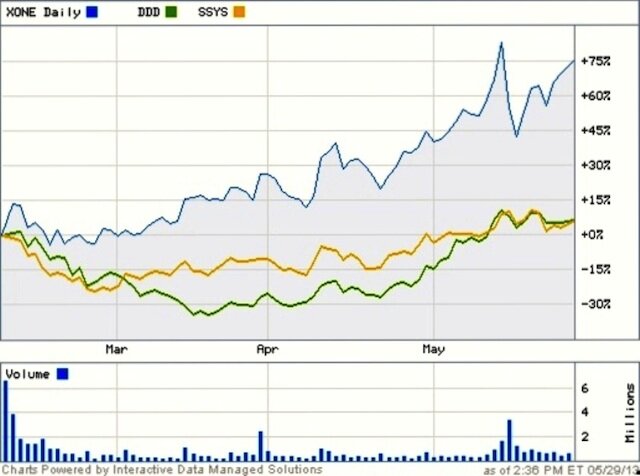 Exone differs greatly from DDD and SSYS both in market (industrial applications for 3D printing) and size.  The chart below reveals how much smaller ExOne is than Stratasys and 3D Systems in multiple metrics.

What do investors see in ExOne, a comparatively small 3D printing company in a market niche not pursued by Stratasys or 3D Systems that has caused the stock to perform as it has?  I believe there are several answers which I will discuss in this article. 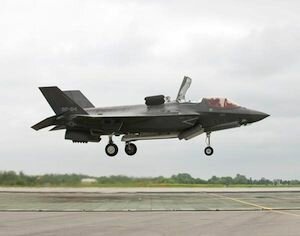 ExOne manufactures and sells 3D printers and printing products in the Americas, Europe, and Asia.  The company enables designers and engineers to design and produce industrial prototypes as well as production parts primarily in the aerospace, automotive, heavy equipment, and energy/oil/gas industries.  ExOne makes machines for commercial sales but also derives significant revenue from its Production Service Centers (PSC) that use its machines to manufacture parts for customers.  In addition to their advanced 3D printing technologies, ExOne is also a leader in laser marking for use on advanced ceramic matrix composite (CMC) materials. These materials will begin to be deployed in future engines, such as the F135 engine that will power the Joint Strike Fighter.  ExOne is not the company that will make your desktop 3D printer, and according to some industry experts, maybe that’s a good thing.

Terry Wohlers of Wohlers Associates, a leading authority and industry expert in 3D printing technology stated in his blog post dated 5/25/13 that “The (3D printing) industry is expected to continue strong double-digit growth over the next several years. By 2017, we believe that the sale of 3D-printing products and services will approach $6 billion worldwide. By 2021, we forecast growth to reach $10.8 billion. It took the 3D printing industry 20 years to grow to $1 billion in size. In five additional years, the industry generated its second $1 billion.  It is expected to double again, to $4 billion, in 2015.”  This is the definition of a high-growth market opportunity.

More specifically to ExOne, many industry analysts such as Holden Lewis of  BB&T Capital Markets  have stated that the major growth in 3D printing over the next decade will occur in the industrial, large-scale market.  In a recent interview with Investor’s Business Daily Lewis stated “we think ExOne is in a faster-growing niche”.  It seems many industry insiders agree.  At the “Inside 3D Printing Conference” in New York held in May, one of the takeaways as outlined in an article by Sarah Boisvert was that investors would be wise to focus on companies like ExOne that have industrial applications in the 3D printing space. 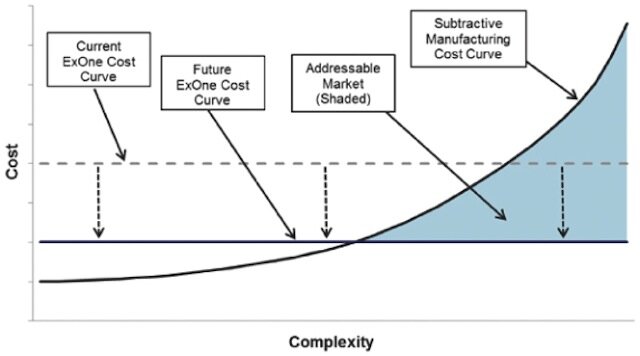 The market opportunity for ExOne lies on the right side of the Cost/Complexity curve pictured above. As complexity increases, traditional subtractive manufacturing requires additional machining and processing, which in turn increases cost. The ExOne cost curve is flat relative to complexity as products are printed or produced, and the actual cost to produce a simple part is the same as a more complex part because no incremental machining or processing is required with increasing complexity.

ExOne has given guidance of $48M to $52M in sales for this year, which is nearly double last year’s $28.7M, and analysts are expecting a turn to profitability in the second half of this year.  Early average estimates are for ExOne to make .65/share in 2014, ramping up to .90/share for 2015.  The XONE projected earnings picture should become clearer as more analysts begin following the company.

Looking ahead, ExOne CEO S. Kent Rockwell was upbeat during the release of First Quarter 2013 results, stating:  “We continue to be very encouraged with the opportunities that present themselves for our 3D printing capability…We are steadily advancing our growth strategy. This includes the expansion of our manufacturing capacity in Germany, upgrading our PSCs and working to establish a more robust PSC network. Importantly, we are also making solid progress with our materials development processes.”

In 2012, ExOne’s PSC network accounted for 45% of total revenues utilizing just 5 PSC centers. The company plans to expand to 15 PSCs by 2015, and that rapid expansion is why many investors (including this writer) are bullish on the company.

ExOne’s technology is covered by a variety of patents and licenses for use those patents. From their 10-K filed in March  they report they are the worldwide licensee of certain additive manufacturing patents belonging to MIT (“The MIT Patents”) with exclusive rights.  Additionally, ExOne holds multiple patents resulting from the acquisition of Prometal RCT prior to going public.  ExOne states from their annual report:  “We have developed know-how and trade secrets relative to our 3D printing technology and believe that our early entrance into the industrial market provides us with a timing and experience advantage. Through our investment in our technology, we have been able to qualify industrial materials for use in our 3D printing machines, and we intend to continue such efforts. In addition, we have taken steps to protect much of our technology as a trade secret. Given the significant steps that we have taken to establish our experience in AM for industrial applications, as well as our ongoing commitment to research and development, we intend to maintain our preeminent position in the AM industry market.  We believe that we are an early entrant into the additive manufacturing industrial products market and one of the few providers of printing solutions to industrial customers.”

ExOne increased their investments in research and development by 33% in 2011, and another 26% in 2012.  In their S-1 Registration Statement for their IPO in February, ExOne asserts that they plan to continue expansion of their R&D.  Flush with cash from their $92M IPO, they are already doing just that, announcing in April that they opened a new R&D facility in Ohio.

Cutting edge technology is short-lived technology.  The companies that succeed are the innovators who judiciously and skillfully expand their R&D into new frontiers.  ExOne appears to be doing just that. 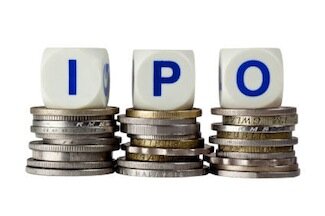 Due to their successful $92M IPO, ExOne now has a strong balance sheet with $71M in cash and cash equivalents and negligible long term debt.  Moreover, any investor in early stage high growth stocks will agree that it’s very encouraging to read these words in XONE’s Q1 2013 filing: “The Company believes its cash and borrowing capacities are sufficient to support its growth plans over the next two to three years.”  While there are no guarantees, it appears share dilution is unlikely in XONE anytime soon.

I believe investors see a large market opportunity just beginning to unfold for ExOne. Many will agree with industry experts who are predicting more growth on the large-scale, industrial end of the 3D printing spectrum where ExOne is a dominant player. Investors see a company with early mover advantages that is in the pole position.  They see a company secured by a wide moat of patents and substantial trade secrets, focused on expanding their leadership position.  They see a strong balance sheet already being leveraged to create faster growth and make additional investments in research and development.  They see a company with a history of remarkable revenue growth on the verge of turning EPS positive.  Like this writer, I think they see a 3D printing company that is comparatively small, but has the pieces in place to become big. Very big.