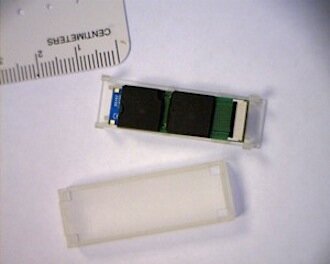 The company is able to 3D print these specialty enclosures for considerably less than conventional methods. $1 dollar each.

It’s always interesting to run across an application for which 3D printing is perfect in a major industry that is also being implemented now, rather than existing only in a visionary’s imagination. 3D printing enclosures for Micro Wireless Sensors and Circuits is just such an application.

Potomac Meso, located in the Washington, D.C. area, designs and develops micro wireless sensors and circuits based upon research through a National Science Foundation SBIR Phase II grant. Using UV lasers, Potomac Meso micro-machines channels approximately 15 microns wide, that are then filled with nanoparticle silver paste. The resulting device can be combined with other components to make such things as micro wireless sensors or mini Arduinos.

Potomac Meso founder, Dr. Paul Christensen, says the application makes sense for two reasons. “First, 3D printing is pretty inexpensive because of our small part size. And secondly, we build custom products that don’t lend themselves to very high volumes, so we can’t afford to use lithographic or molding processes.”

“In the first place”, explains Dr. Christensen, “The packages are only about the size of a pack of gum, and being box-like they are hollow, requiring less material than a solid 3D printed product. The entire device is placed on our micro-circuit board – everything: the battery, sensor, controller, whatever it needs to fully operate – before it is inserted in the enclosure. If added security is required, the box can be sealed with epoxy.”

3D printer costs are usually calculated by the cubic centimeter, so cost is the same if you’re making one large piece or lots of small pieces. Dr. Christensen elaborates, “if you have lots of small pieces, it’s less expensive. There is no waste in the process and additionally we don’t use very much material since it’s a hollow box. And there’s no need for post-processing to add connector holes, as they are in the CAD design.”

The product customization also makes 3D printing a good choice. Volumes are higher than for just a few prototypes, but they are still too low to make sense with production methods for computer chips or MEMS. If using injecting molding, for example, Dr. Christesnen says the cost of the mold itself would have been about $10,000. “I’m able to 3D Print these packages for less than $1 each.”

3D printing is established in the prototyping world as an economical alternative to machine tool processes. Edmond Dougherty of Ablaze Development Corporation in Villanova, PA recently described a prototype for a new electronic device that needs a 4” x 4” x 2” case. He calculates that 3D printing the prototype enclosure cost only about 25% of what it would cost to hire a machinist to create it. But because of the size and prototype volumes it is still 100x more expensive than Dr. Christensen’s case, demonstrating there are still limitations for short production run applications.

Always a futurist, Dr. Christensen sees 3D printing opening new doors for designers. “This technology is a route to building different shapes that would have room to mount sensors for smart products such as clothing, jewelry, or tools. The possibilities really are limitless for production quantities on this spatial scale!”