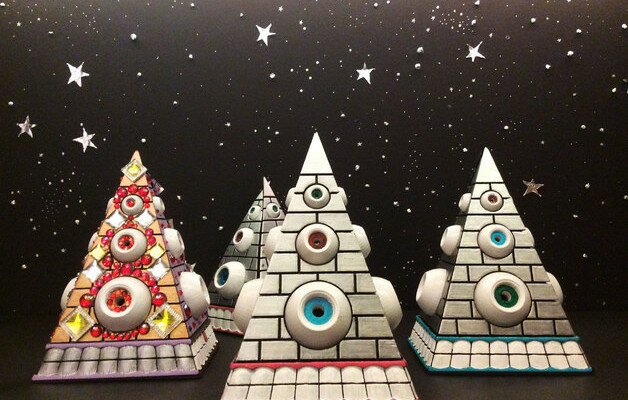 Sure, it is not exactly Broadway, but The Musical Melodyians is chock full of singing, dancing and corny humor.

It also just so happens to feature 3D printed robot/puppets at the center of the whole extravaganza.

Scott Tooby and J. Sayuri are the producers of the made-for-video musical epic and say that they created the musical robots as part of a larger project (and seemingly to have some fun).

“The first Melodyian robot (named Primid) was originally created as part of a larger transmedia project called The Musical Melodyians which is about musical aliens who eat music, create music, and travel through space to save the universe’s musics,” Tooby explained. “It encompasses not only this robot but also a graphic novel, music, and videos about these aliens creatures.”

While the Meolodyians will likely not win a Tony anytime soon, the pairs greatest accomplishment may be the robots themselves, which you can make too, thanks to the fact they have shared their instructions for their aliens on Thingiverse for easy downloading.

They also told 3D Print how it is done.

“It’s an Arduino-based robot that can move around, flash LED lights, and is also a simple digital synthesizer that can emit musical tones,” Tooby said. “It is controlled wirelessly over Bluetooth via external MIDI signals. This might seem a bit strange, but it allows for it to be controlled by most any configurable MIDI controller software or hardware such as Lemur or a DAW. In this manner, I can also control multiple robots simultaneously and sequence their musical and movement choreography.”

The musical project is also a great example of how 3D printing is merging with art in new and unexpected ways, which is exactly what Tooby, who is not a trained engineer but a multi-media artist  and composer says best.

“I was inspired by the artistic potential I saw in this technology and this motivated me to find ways to integrate it into my own projects,” Tooby said, talking about the inspiration behind his musical robot ‘stars.’