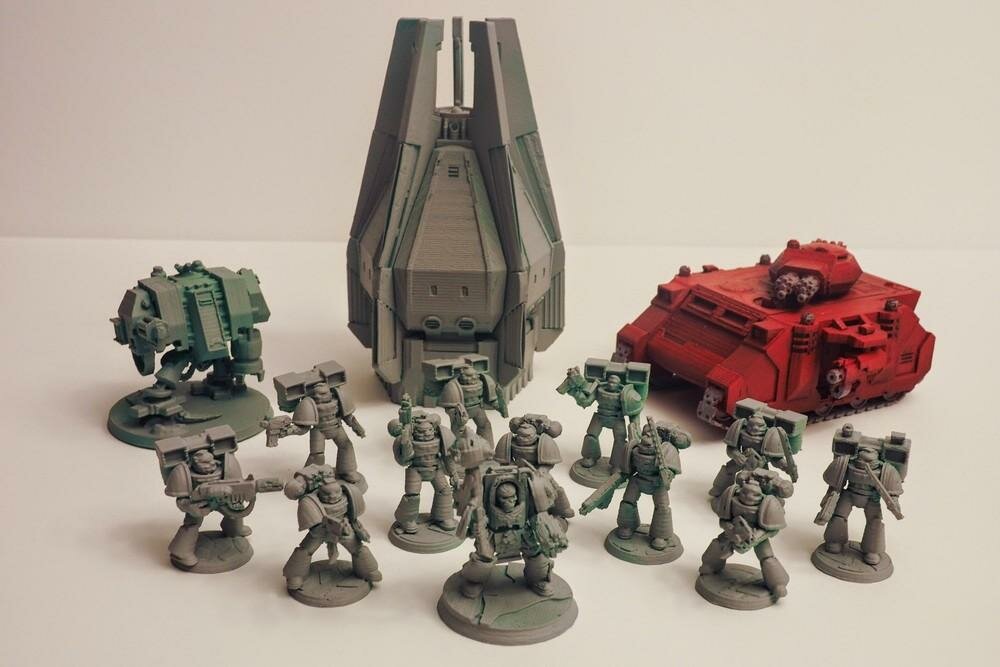 Miniature games have been mainstay of the war game genre for decades. Games like Warhammer: 40K, Warhammer Fantasy Battles, D&D, and many more all rely on miniatures to bring fictional battles to life.

However, for years players have been complaining about the excessive prices of buying miniatures and how they felt like they were being extorted by the larger companies that monopolized the miniature market.

3D printing has the potential to put an end to that and it seems as if big changes will be coming to the miniature game market sooner, rather than later.

Miniatures games have always been reserved for lifers. Lifers who spend hundreds of dollars on bags of disassembled pewter sculptures, put them together, and paint them in colors like “fuegan orange” and “leadbelcher.” It’s a hobby made by the deeply invested, for the deeply invested. Games Workshop manufactures the Warhammer series—one of the most popular names in miniatures gaming—and they happilycharge $150 for a starter set. If you’re looking for hyperrealistic orc figurines, you’ll have to pay a premium—and, no, Wal-Mart can’t save you.

This is how things have always been—if you want in, you have to respect the monopoly. That is, unless you own a 3D printer, like Chuck Thier, a Texas-based software developer. “I’m not an avid Warhammer player, but I’ve always been a fan of the lore,” Thier says. He’d seen a couple of models someone made for printing and thought it would be interesting to play around with. So he began making his own. “The models turned out to be a really good way to test the quality of my printer,” he says. The detail of his models didn’t possess the fidelity of the original miniatures, but they’re still pretty convincing and impressive, especially considering he’s eschewing a giant price tag.

Thier posted the results of his work on Reddit. “It took me at least 40 hours to print the models seen in the photo, and that doesn’t include the failures,” he says. “I also have to take issue with [calling it bootlegging.] You could call it that if the models were exact copies made with a scanner, and if someone was trying to sell them. All the models that I have printed, and the vast majority that I have seen, are custom sculpted by individuals that love the game.”

As you might expect, Games Workshop has zero tolerance for 3D-printed versions of its own product. It’s notoriously litigious—it once famously sued an author for her use of the term “Space Marine”—and its terms of service states that you may not “cast or scan any materials based on Games Workshop’s IP. Reproduction for personal use is not an automatic exemption from copyright protection in many territories worldwide.” (Games Workshop did not respond to our repeated request for comment on this story.)

Games Workshop might not have much to worry about for now, since 3D printing is still far from being a household utility. While Thier has both access to a 3D printer and the time and patience to draft his own minis, it’s still easier to go to a hobby store and secure pieces the old-fashioned way. But Games Workshop is protecting itself from a future where pirating miniatures may be just as easy as pirating music—a more reasonable fear than you might think.

Arian Croft is the proprietor of Ill Gotten Games; its flagship miniatures project, Pocket-Tactics, is available in tidy zip files on its website. You can download the schematics, take them to your 3D printer, and have a full-fledged battlefield at your fingertips—all without spending a dime. Croft doesn’t have a background in design, but he was drawn to the affordable possibilities that 3D printing provided, as well as the chance to construct whatever he wanted.

“[Games Workshop] is going to have to adapt,” says Croft. “There’s already a community behind 3D printing Warhammer stuff, and while most of these people aren’t making stuff with the same quality as the original models, that’s enough for them,” says Croft. “It’s hard to stop, and as 3D printing becomes more mainstream, retailers will need to change.”

Croft speculates that, eventually, major game companies will be forced to use the same business structure he does: offering digital files ready for a 3D printer at an abbreviated price point. In a story as old as time, advances in technology have removed some of the justifiable value of these specific products; from the cotton gin to the iPod, streamlined mechanical factors have consistently wreaked havoc on out-of-date manufacturing.

Whether or not that’s a good thing depends on your perspective and adherence to customs. Miniatures games are unfriendly to new players, but if anyone can get involved without a significant investment, it could bring a lot of fresh blood to the scene. There’s obviously a specific group of people willing to spend an afternoon playing with tiny goblin statues, but there are also plenty who’ve been kept away from the hobby for financial reasons.

At the same time, there’s something slightly sterile about shoving code into a machine and churning out a pristine orc that’s never been touched by human hands. Handiwork—and sheer obsessive dedication—has always been a crucial part of miniatures gaming, and there’s something lost in downloading a model the same way you’d download a torrent.

Nick Poteracki is the designer of Arena Rex, an indie miniatures game that proudly boasts traditionally sculpted figures. He is one of those lifers, and he’s holding out against the 3D-printing revolution for as long as he can. “There are people who play the game twice a year and spend the rest of their time painting and enjoying that part of the hobby,” says Poteracki. “Fifty years from now, I don’t think you’ll see anyone sculpting minis.”

Poteracki waxes poetic about the wonderful inconsistencies of a handmade model; every statue looks a little bit different, hewn by real people who can’t help but love this stuff. There’s something special about a small-ish group of people willing to commit an extraordinary amount of time to satisfy their compulsions, so it’s understandable why some believe 3D printing goes against that code of ethics.

“I’m not exactly a graybeard, but I grew up listening to the same three CDs all winter putting together miniatures,” says Poteracki. “I hope the core experience of the game doesn’t change much because, for me, the hobby is about unplugging and doing something tactile.”