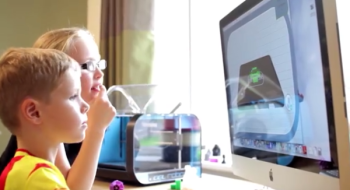 3D printing is becoming increasingly popular. Not just in America, but overseas as well.

According to a recent survey by OnePoll, more than 1 in 10 British adults would be keen on the idea of having their very own 3D printer, even willing to spend over £500 on one – if the technology were easier to use.

Since the UK has approximately 49 million adults, if 11.8 percent of people are prepared to spend £500 or more on 3D printers, the 3D printing market in the UK will be worth an estimated £2.9 billion.

While the results of this poll show that the overwhelming majority of UK citizens are becoming more aware of 3D printing and the potential that it holds, there is still some hesitancy.

According to the OnePoll survey, a reported 4 in 10 adults also admitted to not knowing what they would do with a 3D printer, and 12 percent had no idea what a 3D printer was.

CEO of Robox Chris Elsworthy says there is still a long way to go when it comes to the general homeowner knowing how to make the most of the 3D printing technology.

“We’re finding British adults are becoming more and more receptive to trying new technologies, but as with anything unknown, it will take a while to educate people on why 3D printers can be so good for the home,” Elsworthy said.