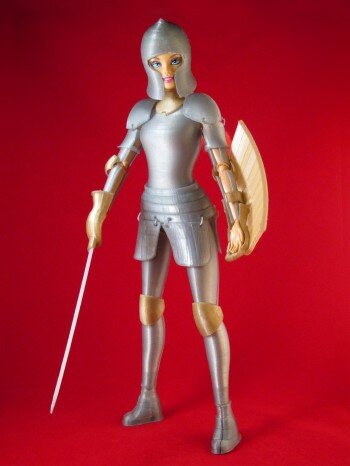 While Barbie has had many occupations over the years, she now has the ability to take on fire-laden dragons with her 3D printed suit of armor, thanks to inventor Jim Rodda who was inspired by his 4-year-old niece to give Barbie even more professions than she already has.

Rodda, a 3D printing hobbyist, has launched “Faire Play” on Kickstarter. Faire Play is a 3D printable medieval armor that fits Barbie and her companions, transforming her from the traditional role of a princess to a warrior. The downloads include everything from the makeover kit to the spear and boots, and pretty much everything else needed to remake Barbie’s look. The goal for Rodda is to distribute the 3D digital files for the armor and he hopes Kickstarter will enable him to design the next iteration of the armor.

Rodda isn’t connected with Mattel, the company that makes Barbie. He is, however, a hobbyist who is asking for pledges to help fund the 3D printing design and process. Eventually, the new makeover for Barbie will be listed under Creative Commons, and Rodda is in the process of making even more boots for Barbie to fill.

If you aren’t looking for a medieval warrior-styled Barbie, but perhaps a more Greek inspired one, Rodda already has that covered with his “Athena Makeover Kit” which is available for free download on Rodda’s website.

If you like medieval armor and feel inclined to change Barbie into a warrior, head over to Kickstarter to pledge your support.