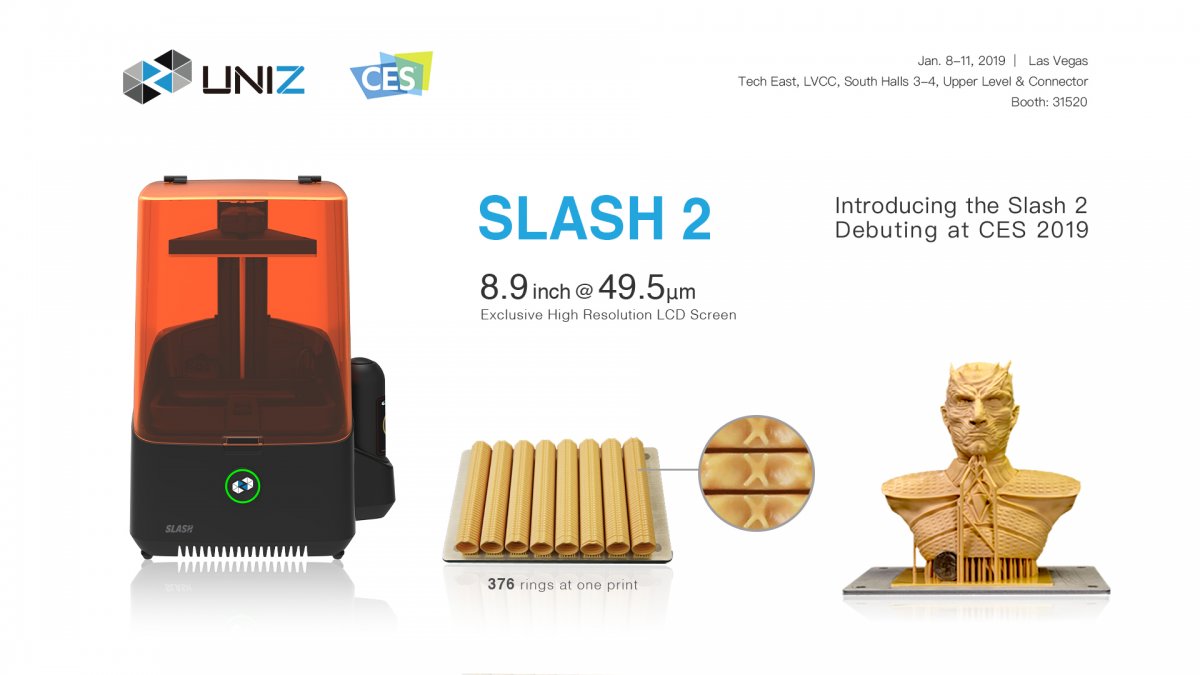 Just over a year ago, UNIZ, a US-based manufacturer of 3D printers for professional use, unveiled its latest 3D printer models and cUDP 3D printing technology. At CES 2019, UNIZ has now unveiled its latest SLASH 2 3D printer series, which is aimed at dentists and jewelry makers, among others, and is said to achieve printing speeds of up to 1,200 mm / hour.
We already reported last year on the 3D printer models from manufacturer UNIZ, which were presented at CES 2018. With the SLASH 2 series, UNIZ once again shows that they achieve high standards with their 3D printers in terms of speed and quality. With speeds of up to 1,200 mm / hour, the SLASH 2 Series 3D printers are among the fastest devices on the market, according to a press release. By comparison, an average 3D printer prints 20-55 mm / hour.

Use in dentistry or jewelry

The SLASH 2 – series 3D printers, which have a 22.6 cm LCD screen, operate with an accuracy of 49.5 and 32.8 micrometers. Like their predecessors, both devices are equipped with cUDP technology. The individual 3D printer models in the SLASH 2 series are suitable for use in dentistry, jewelry and custom fabrication.

The build volume is three times larger than other 3D printers for these applications, promises Jin Jiang Han, who is marketing and sales manager at UNIZ, and is proud to have significantly improved on its predecessor with the SLASH 2 series and, in his eyes, broken the “3D printing speed record” on the market. Trade show attendees were also impressed with the quality, the company continues in its press release. The SLASH 2 3D printer is expected to cost around $4600 (just under €4,000) and be available to all in the first half of 2019 (we’ll report in the newsletter upon market release).

Details about SLASH 2 and SLASH 2J