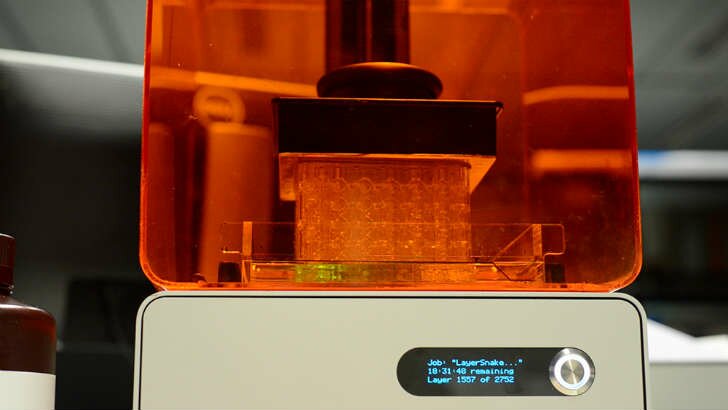 A constant and fair complaint about 3D printing is size limitations, especially with desktop printers. Most desktop printers are bound by build volumes no larger than 8” x 8” x 8”, and few commercial printers can do better than a couple feet. Plenty of projects easily fit inside those dimensions, and plenty don’t. Larger printers are certainly being developed, but there’s another way to get bigger prints: folding.

The team led by Marcelo Coelho, Skylar Tibbits, Natan Linder, and Yoav Reches was supported by [THE NEXT IDEA] VOESTALPINE ART AND TECHNOLOGY GRANT and Formlabs. After much experimenting they managed to print a 50 foot chain in a single print on a Form 1 with a build volume of 4.9” x 4.9” x 6.5”. It’s a good thing Coelho and Tibbits went to school with Formlabs Founder and CEO, Maxim Lobovsky, because they went through six Form 1s throughout their tests. Some of the prints went over 60 hours and the software had to be updated several times. It was a good stress test for Formlabs; Lobovsky commented “With a really high resolution, detailed model, the polygon count of what they were trying to handle was huge. We worked through a lot of performance bugs that we hadn’t yet encountered with models that large to make it work.”

Hyperform is about more than a chain, though:

“Hyperform is a design and research project that attempts to address this problem [size] by identifying computational and material folding strategies that will allow large scale objects to be compressed into a minimal volume to maximize the printing capability of desktop 3D printers. Folding as a computational design and assembly strategy can be found across natural systems, such as in the structures of proteins and DNA, and in industrial applications, which seek to increase efficiency while supporting high degrees of structural complexity, interoperability and reuse.

By expanding the boundaries of what can be made today, we hope these new techniques will also unleash entirely new opportunities. Of particular importance is reversibility, which can allow for the shipping of flat materials that expand to maximum volume on-site, and self-transformation which can allow objects to kinetically respond to their environment and accommodate changing use conditions.”

Usually I’d summarize but I can’t say it better than that. If some of that sounds familiar, recall that Tibbits was part of a 4D printing project. It’s likely that printers will be able to produce emergency shelters that unfold into shape. Furniture too. Maybe even ultralight planes. What do you think you could fit in your printer?