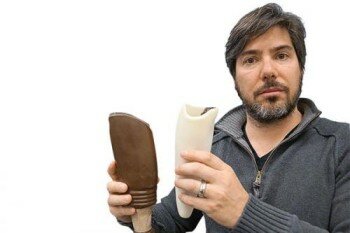 A University of Toronto lab and an international NGO have partnered with a Ugandan hospital in order to use 3D printing to speed up the process of creating and fitting sockets for prosthetic limbs.

According to an article on 3Ders.com, while traditional prosthetic fitting and adjustments are available in some developing countries, the problem, in many countries, isn’t with the prosthetics themselves, but in the lack of trained technicians that are available.

Traditional prosthetic fitting takes weeks, or even months, and requires skilled onsite technicians for the procedures. This is a very time consuming and specialized process, and many developing countries, such as Uganda, are lacking technicians – which can cause the time frame for traditional prosthetics to drag out even longer.

With a 3D printing process, the ability to scan and print an artificial limb is faster and more efficient. The process involves scanning the residual limb and sending the scan back to another country where a digital replacement is then designed. That file can then be sent back to Uganda, where it can be 3D printed. With this technology, local doctors would then be able to create a prosthetic limb in less than 24 hours. This cuts down on time and costs involved, allowing prosthetic limbs to be created in a faster and more efficient manner.

Not only does the 3D scanning and printing process save on time, it cuts costs as well. For many Ugandans, this can mean the difference between being able to obtain a limb – or not. Since much of the population cannot afford to stay in the hospital for lengthy periods of time, the efficiency saves time and eliminates many of the costs that are involved with traditional prosthetic fitting procedures, making prosthetics an option for people who may not otherwise have been able to afford one.

“The under-served population is largely rural,” said Ginger Coons, a PhD student in the University’s lab. “People have to come to the hospital. Not many can afford the long stay. We want to make their stay a lot shorter.”