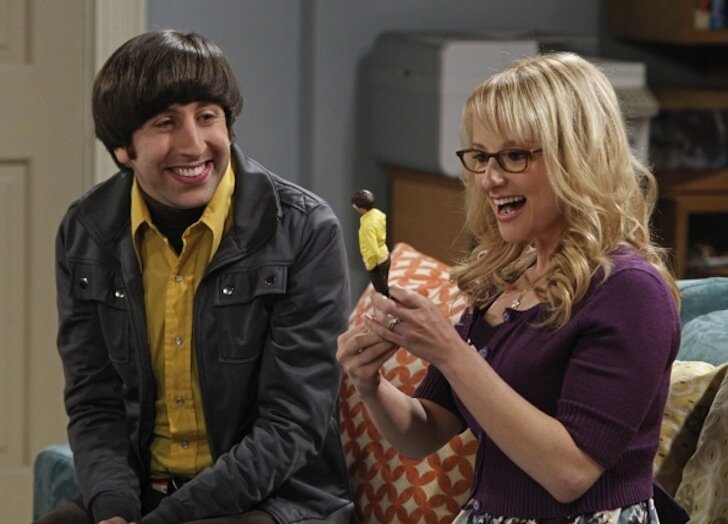 Howard’s wife Bernadette is thrilled to see what her husband 3D printed…until she realized what he spent for the printer. Great episode.

“I have always wanted a 3D printer,” admitted Howard. Perhaps not always, as personal printers have been around for only a few years (the RepRap project started in 2005), but I’m splitting hairs. Thursday night’s The Big Bang Theory put the spotlight on 3D printing when Raj and Howard were disappointed with the (un)likeness of the $500 action figures that were supposed to look like them. Essentially, Raj’s was black and Howard’s had the nose of the lovechild of Dustin Hoffman and Barry Manilow. Raj proposed a solution “to get action figures to look exactly like us… 3D printer.”

Raj went on to highlight the wonder of the make machines, “They’re an engineer’s dream. Anything you can design, a 3D printer can make out of plastic.” If you go through a print service then you can choose from much more than plastic, but they wanted to own a printer so that they could “make stuff that we need for work with it: prototypes of my CAD/CAM designs, specialized tools,” Howard pointed out in agreement. And he’s right; 3D printers are great for engineers, but also for artists, and nerds that want to make action figures of themselves. So they get a used 3D printer for $5,000, and it’s better than any I’ve seen for that price. After printing a working whistle, Howard uses the Xbox Kinect to scan Raj into digital form, where a cutaway conveniently spares the viewers from how agonizing that process can be.

I’ll let you see how it ends. Some of the wording made it feel like a 3D printing promo, which is fine with me; this kind of informative humor will get it into the mainstream faster than negative publicity. Besides, Howard raised another valid point, “Do you realize by owning a 3D printer we are reclaiming the manufacturing process, and taking jobs back from sweatshops in China?” So if you’re not quite decided on whether your shop needs a 3D printer, do it for the children in China.