Last week Charles Townes who shared a Nobel Prize for his work on the development of lasers passed away at the age of 99.  There are many devices that we wouldn’t have today without lasers: supermarket scanners and CD players, for example, are based on laser technology.  But many people don’t realize that high end 3D Printers used for stereolithography have ultraviolet lasers at their core.

It was stereolithography that Chuck Hull, the founder of 3D Systems, invented in 1983.  In its simplest terms, stereolithography transforms a vat of liquid photopolmer material that can be cured or solidified by ultraviolet light.  Since lasers can be focused to small spot sizes, they are more precise than UV lamps to create a pattern. 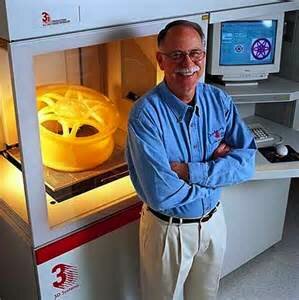 Of course back then, the only lasers operating in the UV were gas lasers.  Helium Cadmium [HeCad] lasers operating in the near UV or blue region of the electromagnetic spectrum were bulky, expensive, unstable, and worst of all had limited lifetimes. That was the nature of gas lasers back then.  In my mind, the real opening up of 3D Printing as a viable tool happened when solid state lasers were introduced with sufficient power to cure the UV photopolymers.  Like the switch from vacuum tubes to solid state electronics, these new lasers were faster, cheaper, more reliable.  In short, solid state lasers were a game changer for the 3D Printing industry.

It is wonderful that Dr. Townes lived long enough to see how his invention changed the world.  From LASIK eye surgery and skin resurfacing to welding and machining in the automotive industry to laser micromachining medical devices and now 3D Printing the applications are around us everyday.  He leaves quite a legacy for the laser is a tool that enables and inspires the next generation of engineers to create inventions he could hardly have imagined in his lifetime.