For anyone who has read blog posts here on 3D Printer.net by Cameron Naramore it may come as quite a surprise to learn that the prolific writer is wheelchair-bound and writes with special tools.  When not writing about 3D Printing, Cameron is actually a maker himself.

A few years ago someone forwarded him a video of a toy robotic arm being controlled by mental commands.  Immediately the blogger started to think about his own plight and Cameron started down a path to make a robotic arm that was wirelessly controlled.

As part of an Indiegogo campaign organized by FabLab Hub to raise funds to purchase tools for makers in wheelchairs, Cameron may get the parts he needs to build his first prototype.

“There is work being done”, says Cameron, “On thought control for moving a robotic arm, but I want to make something that is a lot faster to operate and easier to learn and control.  So, I’ve been looking into using head motion instead.”  While it does seem like science fiction, there are headsets that are based on a spinning cube system.  To make the system function, a person imagines the movement of the cube they want, and that thought directs the spinning cube to move which then translates to a command to the robotic hand. Yes, this does sound slow and complicated!

Just as the use of a wheel on a sailboat is slower than the direct response of a tiller, Cameron’s idea to use head movements would be a lot faster.  Also, learning the thought system takes practice.   Concentration is required so if you’re distracted by anything in the room, the process gets derailed.

While there is obvious potential to eventually market the prototype robotic arm to anyone without use of their hands, there is also a potential market for use of the arm by anyone needing a “3rd arm”.  For example, fixtures and jigs hold things in place but are stationary.  A robotic arm, could give more flexibility and control. 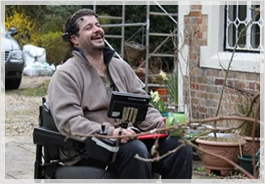 While the first prototype will most likely be fixed in one place, Cameron ultimately wants the system to be portable. He already has a 3D Printer and would design and 3D print brackets for a small laptop to be mounted on his wheelchair for a mobile solution.

To build his first prototype, Cameron needs the Emotiv user interface with a developer license [shown above], a robotic arm with 5 degrees of freedom and 10” median reach, and a software developer’s time for more complex coding.  The Indiegogo campaign that FabLab Hub has put together aims to get 3D Printers and other tools, software, and training for Makers in Wheelchairs.  The other maker in the project is Mike Norton who designs cool Wheelchair People buttons that he wants to turn into figures using scanning and 3D Printing. 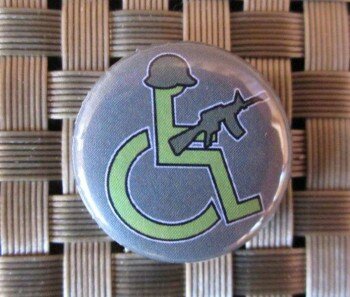 FabLab Hub is about half way through the campaign and has raised about half the funds, so there is still a long way to go!  Companies such as Potomac Photonics in Baltimore, MD and artists like Dizingof have already stepped up to the plate with contributions.  For just a few dollars, we can get some cool rewards but also help get these inspiring makers the tools they need to make their dreams come true.

Here’s the link again to support the project:
http://www.indiegogo.com/projects/3d-printers-for-special-needs-makers

For full disclosure, I helped found FabLab Hub that provides resources to anyone interested in starting a FabLab in the MIT-style, and of course, both Cameron and I write for 3DPrinter.net. 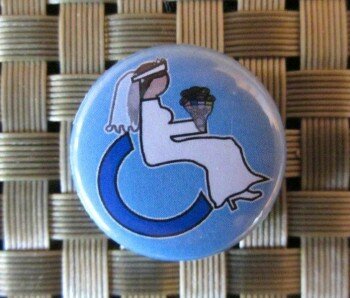