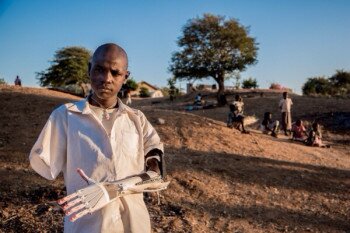 For some people, a 3D printer is more than just an innovative way to create new things, it’s innovation that can create independence and hope for a better future.

Sixteen-year-old Daniel Omar was a victim of a bombing in the Sudan just two years ago. At 14, Daniel lost both his hands, and a great degree of independence, during an attack in which his government attempted to drop bombs on rebel forces. While Omar’s life was spared, his hands and arms were not. “Without hands, I can’t do anything,” Daniel told Time Magazine in 2012.

When Mick Ebeling, CEO and founder of Not Impossible Labs, read about Daniel in the Time Magazine article, he knew he had to help. After all, his company Not Impossible Labs is a research firm that aims to change people’s lives through low-cost solutions for insurmountable healthcare issues.

Taking 3D printers, supplies, and laptops, Ebeling traveled to the Nuba Mountains with the goal of meeting and helping Daniel.

According to Time Magazine, the place where Daniel lived has been described by the UN as the most challenging refugee camp in the world. “Now imagine living there and not having arms,” Ebeling said. “The gap between living and dying is eating and drinking water.”

Together with his team, Ebeling created 3D prosthetic arms for Daniel – for the cost of about $100 each. While these arms aren’t as sophisticated as some of the more advanced and expensive prosthetic, these 3D printed arms are a huge step forward, and are able to give people like Daniel the ability to perform basic tasks – such as eating and drinking, as well providing hope for the future. After receiving his new arm last November, Daniel was able to feed himself for the first time in two years. He is now helping to produce limbs for other recipients.

Before he left Sudan, Ebeling helped set up a 3D printing lab in a nearby hospital and taught people there how to create the limbs. The hospital is now printing a limb a week without assistance.

Mick Ebeling’s inspirational project shows that great things can happen when somebody cares, and the potential that 3D printing has to change lives for the better.