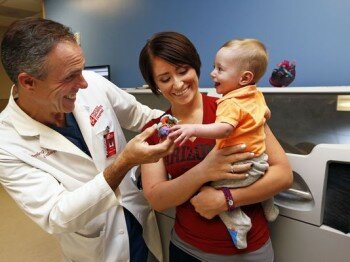 Luke Miller was born with a pulmonary atresia, a congenital malformation of the pulmonary valve.

By using data from a CAT scan, Phoenix Children’s Hospital used a 3D printer to create a model of Luke’s heart. This allowed doctors to prepare for surgery – before the operation. The heart was printed in red, blue, and green, to delineate vessels and chambers. This allowed the team, led by heart surgeon John Nigro, to prepare their surgical strategy before the operation began.

The 3D printed model not only helped doctors, it put Luke’s parents at ease as well.

Luke’s parents describe the whole experience as frightening, but the 3D printed replica of their son’s heart, offered some comfort by allowing them to visualize the surgery. Luke’s mom, Kelli Miller says that the level of care that Luke received was outstanding. “They absolutely took great care of him,” she said. “I wouldn’t have wanted him to go anywhere else.”

At 8 months old, Luke visited the Phoenix Children’s Hospital for a checkup. The 3D printer used to make his replica, a 3D System printer, was making another 3D printed version of another child’s abnormal heart. The hospital’s pediatric cardiology division chief, Dr. Stephen Pophal, says that the hospital considers 3D printing technology to be a “game changer” in how heart abnormalities are fixed.

While 3D printers are gaining interest around the world, director of marketing for Stratasys says that he doesn’t expect 3D printers to become common in every house. “Your mom isn’t going to have a 3D printer,” he says. But this doesn’t change the fact that 3D printers are becoming very useful for consumers in other ways; such as in the form of 3D printed replicas of hearts to help aid doctors through surgery.