3D printing services are getting more “flexible” with their material choices these days. Flexible, as in squishy. News out of Shapeways and i.materialise this week show off their spongy new materials.

Shapeways had experimented with a flexible material last year but it unfortunately wasn’t quite ready for prime time. They moved on to a black, rubber-like material called Black Elasto Plastic, which also ended up being discontinued.

But great news: Shapeways continued working on the original flexible material all this time and it’s finally almost ready for order. Here it is in action:

The folks over at i.materialise are also on to their own squishable material. They are only on their initial tests (update: available to manufacturing and prototyping customers now), but here are some photos of the yet unnamed material — without a video we’ll just have to assume that it unsquishes too (see update below). 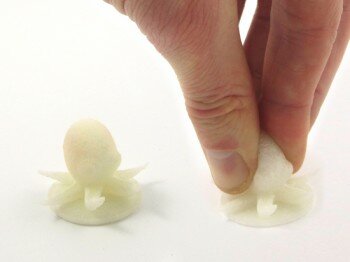 And here is it working to stop a window door handle from noisily slamming against the wall: 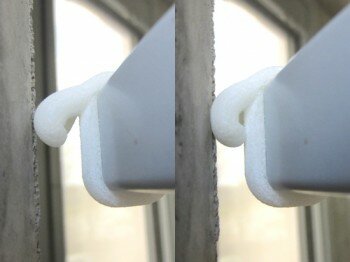 Here’s to hoping that both these show up in the material selections at Shapeways and i.materialise in the very near future.

Update: Apparently, the flexible material from i.materialise is the very same TPU-92A-1 material that we wrote about earlier this month. Here’s the video we had published in that article: