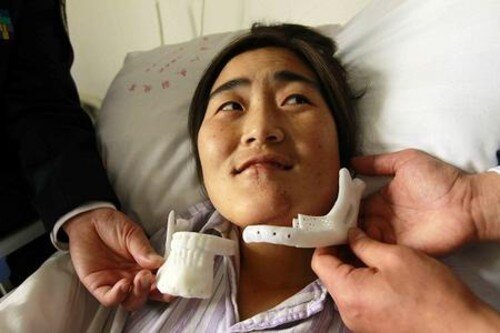 3D printing technology has been used in a lower-jaw reconstruction surgery, according to a recent announcement from the Shanghai Medical Association vice president Liu Guoqin, who is also the director of the dental center at Military Hospital 411.

According to 3Ders.com, the patient who received the surgery, Ms. Sun, had been suffering from a tumor that had caused serious damage to her lower jaw. This surgery freed Ms. Sun from 5 years of pain and gave her back the ability to smile.

The lower portion of the jaw, known as the mandible, plays an important role. It is essential for functions such as chewing, speaking, and even keeping the airway open.

The surgery that Ms. Sun received involved implanting a 3D printed titanium lower jaw. The implant was created by Zhang Qingfu of the oral surgery center and Dr. Gang. The jaw was designed to be lightweight and, thanks to 3D printing technology, the implant was able to be created as an exact fit.

Ms. Sun said that she was surprised by the speed in which technology is developing, and the smile that she gives now says it all.

This groundbreaking surgery is the first time that 3D printing has been used in China to correct a mandibular defect. Titanium 3D printing shows great promise, since it allows mandibular defects to be repaired in an efficient manner, without requiring difficult and time-consuming bone grafts. 3D printing also allows implant surgeries to be completed on an individualized basis, allowing for more precision and better results.