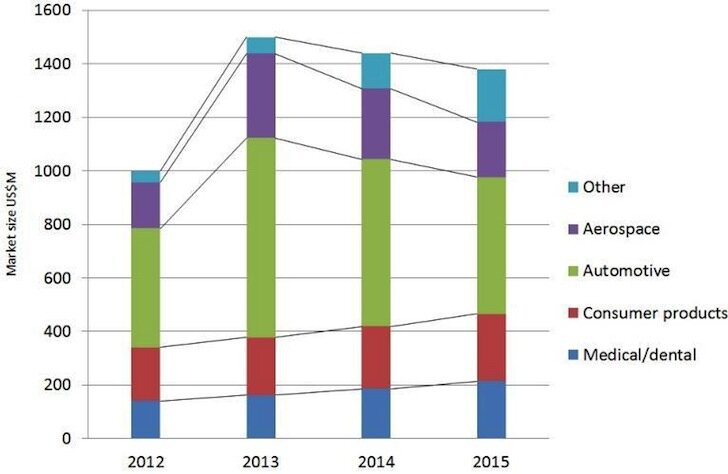 A new research report, 3D Printing 2013-2025: Technologies, Markets, Players ($3995), has been released from the independent market research firm IDTechEx. In it, they analyze the various 3D printing technologies and how they are playing out in both current and future years. It presents the profiles of the major players, along with insights from interviews with companies involved in 3D printing, and detailed forecasts for the future of the 3D printing market.

The chart above is from the report and shows the distribution of 3D printing revenue in the major market segments of aerospace, automotive, consumer products, medical/dental and “other.” It only goes to 2015, so you can’t really get a sense of what the future holds, but at least you can see where we are now. However, the report does say that the fields that will see the highest growth over the next fifteen years will be in medicine, dentistry, designer products, and architecture.

One thing I can’t wrap my head around is the report’s prediction that the billion dollars in business generated in 2012 will turn into only four billion dollars by 2025. I know a quadrupling of business in 13 years is an incredible feat for most markets, but it seems to me that the growth will be well beyond that. 3D printing is just not going to simply advance in a linear fashion. Just look where the industry was only 2-3 short years ago. Four billion is a good start, but come on, I say it will be considerably more than that. Haven’t they heard, it’s a manufacturing revolution!