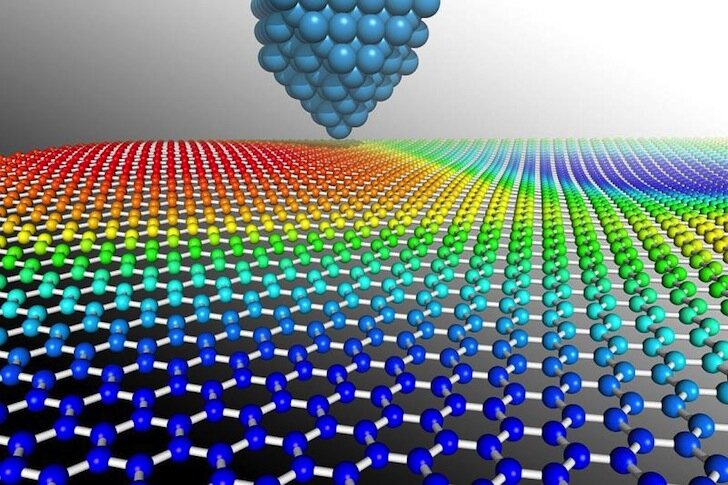 If you haven’t heard of graphene, you’re about to. I don’t just mean in this article either. Scientists have been trying to isolate graphene since the ‘40s, and in 2004 a couple of them, Andre Geim and Konstantin Novoselov, managed to do it at Manchester University. A 2010 Nobel Prize of Physics went to those same scientists for their work on graphene, and this year researchers at Chalmers University of Technology secured a €1 billion grant from the European Union to research possible applications of the material. That’s a big grant. Graphene must be some serious stuff.

And it is. Graphene can be defined a few different ways, but the simplest description is that it’s a single layer of carbon atoms in a honeycomb lattice structure. It’s extremely light, strong, flexible, and conductive, and its possible applications range from integrated circuits to solar cells. Additionally, graphene aerogel is considered the lightest known material. Carbon is also incredibly abundant. You can guess where this is going. Using graphene in 3D printing was talked about two years ago, but now there’s a real development.

American Graphite Technologies Inc. (AGIN) recently announced a letter of intent to partner with three Ukrainian research institutions — National Academy of Science of Ukraine, National Science Centre, and Kharkiv Institute of Physics and Technology — to explore the potential of 3D printing with graphene. Even more recently the company announced it “has reached an agreement in principle with its collaboration partner, Kharkiv Institute of Physics and Technology in Ukraine on its project named “P600” which will be to research the properties of graphene contained matter as working material for 3D printing.”

When 3D printers can use graphene, they’ll truly be able to replicate themselves. That’s only the tip of the iceberg though. Complex electronics, unbreakable frames and brackets, and even sources of renewable energy could be printed in graphene. Hell, since carbon is floating around us, it may be possible for a 3D printer to pull graphene literally out of thin air. A graphene 3D printer farm could also serve as a carbon sink, which would help offset all the emissions produced by conventional machinery. 3D printing and graphene are amazing when considered separately. I don’t know how to properly word out how exciting their future fusion is.